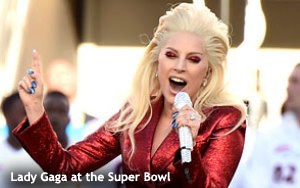 Lady Gaga knocked the national anthem out of the park, Beyonce choreographed a halftime homage to the radical Black Panthers, and Colonial Williamsburg ran a commercial in which historical film footage of America was shown in reverse.

It was an unfortunate device. This one-minute spot for Williamsburg tourism -- which aired during the second half of the Super Bowl and featured narration by Tom Brokaw -- was presumably supposed to honor America, while also positioning Williamsburg as the nation’s birthplace.

Bostonians and Philadelphians have an inalienable right to quibble with that claim, but the worst part of the spot was the ill-chosen imagery such as the film snippet from the famous flag-raising at Iwo Jima running backwards so that it looked as if the flag was being taken down.

Other clips that were seen running backward -- such as civil rights marchers, for example -- made you feel as if you were watching a commercial that for some reason was trying to tell you that America was in decline and sliding backwards.

That can’t be true, can it? We’re the country that puts on the Super Bowl, for heaven’s sake! It is no small feat to stage this thing every year. But it is also true that as in past years, all the time, money and effort invested in its many elements -- most notably the commercials and halftime show -- are no guarantee of victory.

This year’s halftime show was a case in point. The headliners were Coldplay, but they were upstaged by “special guests” Bruno Mars and Beyonce, who decided to go political with her dancing Black Panthers. Of the three, Mars was the one who most stole the show from the others.

Overall, however, the production of this year’s halftime show was missing a certain something: Darkness. Because of the game’s West Coast location, it was still daytime at halftime, which meant that the show had to do without the dramatic lighting effects that have played such a crucial role in past halftime shows. It didn’t help that the acoustics in this stadium -- along with, presumably, the sound set-up that was put in place for this show -- were such that Coldplay lead singer Chris Martin could not be fully heard.

As for the commercials, none of them stood out as particularly epic or outstanding. For one thing, some of them were already seen all over the place in the days before the game -- such as the Helen Mirren Budweiser spot in which she railed against drunk drivers, and the Michelob Light spot in which athletes were shown working out and breathing heavily, and then seeking refreshment with a cold bottle of Mich Light, as if beer was now to be considered the equivalent of Gatorade or VitaminWater. This connection between beer and health makes no sense.

It was fascinating to observe two separate spots dealing with bowel health. One of them had to do with an ailment known as OIC -- opioid-induced constipation. This spot was produced and paid for by a consortium of drug companies and pain-management advocacy groups.

The other spot, seen later in the game, was for a drug called Xifaxan, which the commercial recommended for those suffering from IBSD -- which stands for irritable bowel syndrome with diarrhea. Super Bowel, anyone? If these ads demonstrated anything, it was Big Pharma’s love of acronyms.

The Xifaxan ad featured an animated character that looked like a pink coiled intestine. It was one of many weird, talking objects and animals seen in the Super Bowl commercials. One was a talking men’s razor in the Dollar Shaving Club spot. Another was the strange creature identified as a puppy-monkey-baby in the spot for Mountain Dew’s Kickstart energy drink that is my choice for the most off-putting commercial in the entire Super Bowl telecast.

There was ample competition for this prize too, including the Doritos commercial in which a baby in a mother’s womb craved Doritos so much that it shot out of her; and the spot for Cure Auto Insurance in which a young man sitting by the hospital bedside of an elderly man was so busy ogling a pretty doctor that he didn’t seem to notice that the elderly man was flat-lining. How this connects with the benefits of this company’s insurance products remains a mystery.

For my money, the two best pieces of advertising in the whole game were not technically commercials at all. One was the CBS spot that announced that “The Good Wife” would end its run this spring, which means only nine episodes remain of this Sunday night TV staple. This was a new, very high-profile way of announcing the end of a series, and it took everyone by surprise. Look for these final episodes to “The Good Wife” to score great ratings.

The other was Broncos quarterback Peyton Manning telling interviewer Tracy Wolfson of CBS Sports -- in their post-game, on-the-field interview -- that he planned to “drink a lot of Budweiser tonight” as he celebrated his team’s win and he contemplated his future.

According to various reports, the Budweiser folks said after the game that they in no way paid Manning to mention their brand in this context. Maybe they should consider sending him a check now, though.