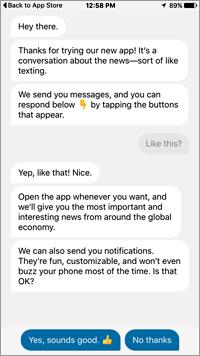 Quartz released its first news app Thursday, available exclusively on iPhones. The interface isn’t like your usual news app -- instead, it’s like iMessage for news.

Quartz, the 4-year-old business news publication owned by Atlantic Media, announced in a post on its Web site  that the app is an “ongoing conversation about the news, sort of like texting.”

The app sends messages, photos, GIFs and links to users, who can tap to respond when interested in learning more about a topic. Each session lasts just a few minutes.

But Quartz’s app isn’t like Siri; it’s not an automated assistant. Instead, the responses are written by a team of Quartz writers and editors, led by Adam Pasick. According to The Verge, it’s the same team who are in charge of the company's "Daily Brief" newsletter.

When users open the app, they are presented with a chat interface. A message bubble with an ellipses appears, as if one is waiting for a friend to type an iMessage.

The first "text" introduces a particular story, and from there, you have a few ways you can interact.

The app then gives you two choices to “respond” to. One is usually an emoji related to the story or a question. This response dives you into the story, and the app shares images, GIFs and more information. The other option is “Anything else?” which takes you to the next story.

Texts also come with an arrow pointing to the right. When you click on it, it takes you to a Quartz article about the topic.

Get enough texts as it is? Quartz says the app “won’t buzz you unless it’s really important” and that “most alerts will just quietly light up your phone.” The app also has an Apple Watch complication that monitors how the U.S. markets is faring in the form of an emoji.

Though this is Quartz’s first news iPhone app, the company released an iPhone app last year called “Flags,” a custom keyboard to type all of the world’s flags in emoji.

MINI is the launch sponsor of Quartz for iPhone. An Android version is in the works.