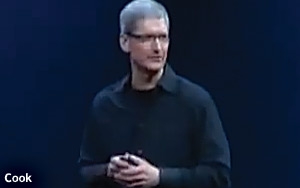 Your refusal to allow Apple to help the U.S. government gain access to data in one of the iPhones used during the San Bernardino massacre puts U.S. citizens at risk of being murdered at the hands of terrorists. Not only in the United States, but worldwide.

What if others die because the iPhone belonging to the shooter, Syed Farook, contains pictures and instructions of other intended targets, along with phone numbers of terrorists? Would executives from Google, Facebook, Twitter and other companies stand beside you in solidarity?

I respect your decision to protect and project the image of privacy for Apple users and Apple's technology, but in the digital age, privacy has become a fallacy created as an illusion to satisfy stockholders and existing and potential new customers. We have seen this in the multiple hackings and theft of data at banks, retailers and U.S. government agencies.

Since 1990, when I began writing about software, hardware and the Internet's infrastructure, I have made an effort to avoid putting anything in digital form, from emails to bank documents and now entries in my iPhone that I wouldn't want anyone else to see.

The government is not attempting to weaken encryption, as others have reported based on your letter to consumers. It simply wants to prevent others from dying.

If Apple was a person, refusal to comply could give the courts reason to suspect aiding and abetting. As Will Strafach, a mobile security expert, states in an ed-op piece, Apple’s objections likely goes well beyond the moral arguments the company has posted publicly.

Stepping up to help the F.B.I., John McAfee, the antivirus software developer, wrote an op-ed in Business Insider offering to hack the iPhone.

In a sense, McAfee is correct. The F.B.I. should not have used an antiquated law from 1789 -- the All Writs Act -- to force Apple's hand. Instead the government agency should have went directly to companies like McAfee to crack the encryption, which he said would take three weeks.

“With all due respect to Tim Cook and Apple, I work with a team of the best hackers on the planet,” McAfee wrote in the op-ed piece. “I would eat my shoe on the Neil Cavuto show if we could not break the encryption on the San Bernardino phone."

In McAfee's words, "this is a black day and the beginning of the end of the U.S. as a world power," but not only for the United States, but the technology and advertising industries when companies need to make a decision to either comply with government requests or respect the wishes of citizens.

Best wishes from an Apple fan.