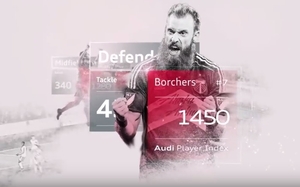 Audi is expanding its partnership with Major League Soccer with the Audi Player Index, a new statistical tool that will track position-specific player stats in near real-time across all MLS matches.

The Index tracks nearly 90 components and 2,000 player movements in each soccer game to create one definitive evaluative score for every player. These actions, which range from goals and assists to crosses, saves, passes, challenges and tackles, are calculated during each game in near real-time. The Index then considers the position of the player, the pitch location and game-specific components and evaluates each action based on three Audi brand attributes: technique, efficiency and dynamics. The result is a unique Audi Player Index score assigned to every MLS player during each game.

Later in 2016, fans will be able to engage with the Audi Player Index via updates during every MLS match and live player rankings in near real-time. The automaker has created a video about the statistic available at MLSsoccer.com/Audi. For the especially enthusiastic, there’s the Audi soccer IQ quiz.

Audi is committed to helping the sport of soccer grow in the United States and Canada, says Loren Angelo, director of marketing, Audi of America.

“By introducing the Audi Player Index we can engage more fans to follow, celebrate and view MLS games in a way they never have before through the use of this exciting and innovative technology,” Angelo says in a release.

To cap off the season, Audi will honor the player with the highest Index score with the Audi Player Index Award. In order to be eligible, players must have appeared in at least 24 games, approximately 70% of regular season matches, and have played at least 1,530 minutes during the regular season. The winner will receive a one-year lease of the all-new 2017 Audi R8 at the 2016 MLS Cup.