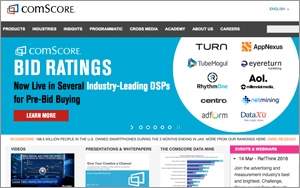 The stock of comScore -- the media measurement company -- was slammed today. The company, according to a SEC filing, was looking into  “potential accounting matters."

Midday Monday trading had the media measurement company’s stock plunging 35% to $26.52. The company said it will miss the deadline to file its annual report and would suspend its dividend.

Last year, comScore bought up TV measurement company Rentrak for $732 million -- a deal that closed this past January. Analysts expect the combined company to be a competitor to Nielsen.

Recently, the company announced that it would begin offering a cross-platform measurement system -- traditional TV, over-the-top (OTT) and mobile and desktop digital viewing -- starting in April, in time for the television upfronts.

Analysts say the product looks to compete with Nielsen and its new Total Audience Measurement service.

In addition, comScore plans to launch a syndicated, cross-platform daily ratings offering in time for the fall TV season.

One of the biggest investors in Rentrak, and a big investor in comScore, is advertising holding company, WPP Group. WPP Group has a 16% stake in the combined company, with an option to grow it to 19.9%.