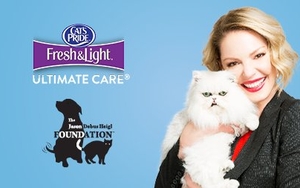 The actress will be featured in the brand’s integrated marketing campaign which will include TV, print, digital and radio and is the company’s largest media campaign ever.

Themed “Cats are Complicated. Great Litter is Simple.”the campaign features Heigl as a cat owner/couples therapist who helps owners improve their relationship with their cats. The premise is that using Fresh & Light Ultimate Care can reduce tensions all around and create healthier interactions between cats and their owners.

This is the first time Cat's Pride has partnered with a celebrity, says Dan Jaffee, president and CEO of Oil-Dri, the makers of Cat’s Pride.

“We were seeking someone who is as passionate about animals as we are, and with whom we could build a strong, mutually beneficial partnership for years to come,” Jaffee tells Marketing Daily.

The campaign is aimed at cat owners who want to keep their cats happy yet have had to compromise on convenience or performance with other litters they've tried. The campaign is “revolutionary for the cat litter category as it’s the first time in recent history that a litter product relates to consumers on an emotional level,” he adds.

The humorous TV spots are directed by Anne Fletcher, known for films such as “27 Dresses” and “The Proposal.”

Heigl, a longtime animal lover, co-founded with her mother Nancy Heigl the Jason Debus Heigl Foundation, which is named after her brother who was killed as a teen in a car accident. Cat’s Pride will support the foundation by donating a portion of every Fresh & Light Ultimate Care purchase to support the Foundation’s animal advocacy work.