Citing a flattening of its user expansion, eMarketer has significantly lowered its ad spending projections for Twitter. The revision, which is part of a new release of digital media projections from eMarketer, estimates Twitter will generate $2.61 billion in advertising revenues in 2016, down $340 million from the $2.95 billion eMarketer projected in its last forecast in the third quarter of 2015.

eMarketer Senior Forecasting Analyst Martin Utreras estimated that 90% of Twitter’s revenues would be derived from mobile users, noting, "We have yet to see material monetization of logged-out users.”

eMarketer projects Twitter’s user base will climb to 291.0 million users worldwide this year, but reduced its estimates for the number of U.S. Twitter users ages 12 to 24 and 65 and older in the U.S. based on its new data. 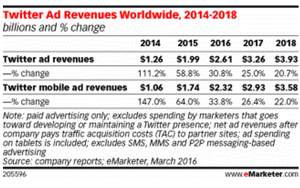