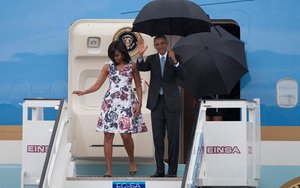 Google hopes to become the first American Internet provider to connect Cuba with the rest of the world by expanding WiFi and broadband access to the country's businesses and citizens.

Cuba is one of the least digitally connection nations, but on Sunday U.S. President Barack Obama told ABC News prior to his Monday meeting with Cuban President Raul Castro that Google will start supporting the country's WiFi and broadband infrastructure.

Fewer than 5% of the homes in Cuba have access to the Internet. "One of the things that we’ll be announcing here is that Google has a deal to start setting up more WiFi and broadband access on the island," Obama said. "Change is going to happen here, and I think Raul Castro understands that."

Cuba early last year launched its first public WiFi hotspots in its second-largest city, with help from ETECSA, the island's state-owned telecom company, but its $4.50 hourly fee was too expensive for most of its citizens.

Obama and Castro plan to talk at Havana's Palace of the Revolution. He also will speak to some of the country's entrepreneurs.

It is the first time in 90 years that a sitting U.S. president has visited Cuba. U.S. cruise ships in the Atlantic continually passing the island, but that could all change.

Companies are not hesitating when it comes to moving in to support Cuba. Late last year U. S. airlines said they would begin to schedule flights in and out of the country from the U.S. Starwood Resorts announced during the weekend that it will refurbish and manage two hotels in Havana. Airbnb plans to open up all its listings April 2.

Obama's historic trip to Cuba comes a couple of hundred days before American voters pick his replacement to lead the country. During his conversation with ABC News, he said the United States has a lot of work to do, such as bringing an end to the embargo currently in place against Cuba. Differences between the United States and Cuba still exist around human rights and individual liberties. It may not happen before the end of Obama's presidency.