“Hello World” isn’t about Google or Facebook or Apple — it’s about taking “a fresh look at the explosion of technology all around the globe, and an exploration of the subcultures rewriting the rules within different regions,” per the company.

CA Technologies is the sponsor of the series. Ads on the “Hello World” page will include banner ads, preroll and “Supported by CA Technologies” call outs.

Keith Grossman, U.S. head of sales at Bloomberg, told Publishers Daily via email that “Hello World” will appeal to audiences interested in technology and travel.

“Hello World” is the first show to build Snapchat footage into a show or series, according to the statement. Snaps from Vance and other members of the crew will feature in the series, along with live shots from the field, giving a “visceral sense of being along for the ride.”

The digital tech travel show will air a new episode once a month. Each episode will explore a different country and look at the ways in which the local culture and surroundings have shaped their approach to technology.

In the second episode, Vance interviews the founder of Spotify in Sweden. Later in the series, Vance goes behind the scenes with Richard Branson when he introduces his new spaceship, Virgin Galactic.

The first episode of "Hello World" will re-air on Bloomberg TV this Friday. On TV, CA Technologies will own all commercial space (120 seconds) within “Hello World,” Grossman said. 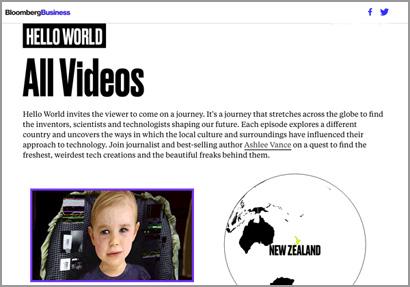