It's All In The Header Tag

Header bidding is picking up steam among publishers—at least among the ones Index Exchange works with.

Header bidding is becoming more popular, as it offers publishers access to programmatic media inventory at the beginning of the auction and enables them to see inventory from all demand sources. Among its advantages: being able to laser-target the right audiences with the most valuable inventory to achieve optimal campaign performance.

Lizzie Komar, Index Exchange's director of research and insights, analyzed both the traditional way of putting tags on sites vs. the header tag, where all inventory sources all made available to buyers before a call to the ad server is made. With the header, all demand sources (programmatic, direct, private marketplace, etc.) compete side-by-side. Looking at total gross spend on Index Exchange’s platform globally, Komar found that clients are increasingly placing more spend against the header.

“More buyers are spending more money on the accounts that we’ve integrated with headers,” Komar said. “There’s just a higher proportion of spending through headers now, vs. tag-based.”

The implications of the trend at Index Exchange may be of interest to ad-tech players that are involved in header bidding, publishers—and advertisers, of course. Programmatic, which is estimated to account for some $27 billion in ad spending this year, has the opportunity to compete alongside direct-sold inventory in the header. The trend could mean that tag-based methods will fade away at some point. When? Who knows. But the trend bears observation.

Komar thinks of the tag-based method as the technical way that publishers used when they were first testing auctions. The rapid adoption of the header suggests that more publishers are getting comfortable with programmatic. Of course, there are still plenty of publishers that aren’t at all comfortable with it, but they're testing and learning.

The header offers publishers more control and flexibility over the auction process. Tag-based inventory takes more time since inventory jumps down from exchange to exchange via the waterfall, losing value with each jump. Page load times can be slower. Many publishers are willing to pay a premium to secure high-value inventory through the header, according to Komar.

The takeaways from Index Exchange’s analysis of its own clients’ spending is interesting. For one thing, it's true: using the header means that publishers that have been relying on direct sales deals can open their inventory to a lot more demand sources. Programmatic can then compete with direct-sold inventory and other sources—side-by-side. The buyer gets choices. It’s not about where you are in the waterfall. “All demand has the opportunity to bid on the inventory at once,” Komar explained. The point is that not all exchanges have access to the same inventory, so it’s valuable to see everything that’s available.

Header bidding enables buyers to pay fair-market pricing for the impressions they see, and they can use data to determine how they will value these impressions. They can put in a bid that will enable them to secure those impressions.

Komar suggested that programmatic media might become more expensive as the header takes hold. “I think buyers won’t always pay more, but as they get more sophisticated, using data to value impressions and to examine audience-level information, buyers will value an impression a lot higher because they’ve done the analysis that the impression will do more for them.”

Komar maintains that with less information, buyers are beholden to where an impression is in the waterfall. Using the header, they see the impression at the onset of the page load. The header also eliminates issues publishers have around user experience, latency and the amount of time programmatic auctions take to complete. Index Exchange data from Q2 2015 saw 78% of header tag auctions completed in 200 milliseconds or less, while the majority of tag-based auctions took 400 milliseconds or more. (A millisecond is one-thousandth of a second.) 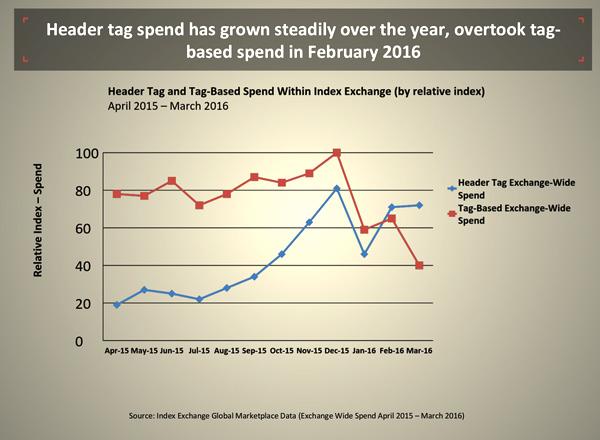