Buick Gears Up For Multiple Launches 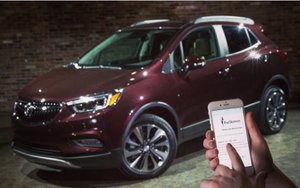 NEW YORK — Buick unveiled the 2017 Encore at the New York International Auto Show, but there’s plenty to come from the automaker before that launch.

The SUV will go on sale this fall, making it the fourth all-new or significantly updated Buick coming in 2016 — joining the Cascada convertible, Envision compact SUV and LaCrosse sedan.

Prior to unveiling the vehicle at the auto show, the automaker unveiled the vehicle in an unconventional way — via theSkimm daily newsletter, which is distributed to 2+ million readers and via theSkimm’s Instagram page.  Its subscribers and followers — mostly young females — got an exclusive first look at the car. theSkimm also featured an image of the vehicle on Instagram here.

The Buick Envision, which hits the dealerships in June, is the next vehicle to launch from the General Motors Corp division, says Molly Peck, Buick’s director of marketing. It slots directly between the Encore and Enclave, which means Buick will offer SUVs in the market’s three most popular segments.

Overall, SUVs now account for approximately 60% of all Buick sales, up from 34% prior to the introduction of the Enclave in 2007. Starting this summer with the arrival of the Envision — which slots directly between the Encore and Enclave — Buick will offer SUVs in the market’s three most popular segments.

The Cascada is the first convertible offered by Buick in 25 years.

“We are looking for white space in that market segment,” Peck tells Marketing Daily. “There is a 30% loyalty rate among convertible enthusiasts.”

After the Envision, Buick will turn its attention to the Lacrosse, the division’s flagship sedan, which launches a new version of the vehicle and an ad campaign in the summer.

The redesigned Encore, meanwhile, is intended to strengthen the appeal of the popular small SUV with more refined styling and new connectivity technology — including available Apple CarPlay and Android Auto compatibility.

A new front-end appearance and a new premium interior highlight the visual refinements, while Apple CarPlay and Android Auto are supported by a next-generation IntelliLink system featuring an 8-inch-diagonal color touchscreen. Push-button start, keyless unlock via the exterior door handles and an 8-inch color touchscreen highlight the Encore’s roster of new standard features.

Encore was Buick’s best-selling vehicle in North America in 2015, accounting for nearly a third of overall sales. Its sales were up 34% for the first two months of 2016, extending a year-over-year sales increase streak to 26 months.