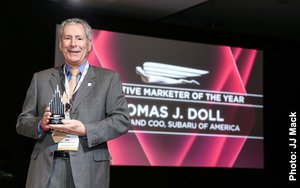 The “Best New York International Auto Show Experiential Program” honors the top immersive premise, execution and experiences as demonstrated during the course of the auto show.

The finalists were determined by the jury after careful consideration of all of the exhibits on the show floor. They are Toyota Motor Co.'s Lexus brand, Chrysler Group's Dodge brand and Ford Motor Co.'s Ford division.

The award goes to Ford. The company’s live "social square" as well as other changes the automaker made to its display stand pushed it over the edge, says Scotty Reiss, co-founder, SheBuysCars.com and president of the International Motor Press Association. Imagination Labs, Detroit, created Ford's N.Y. Auto Show display.

“The entire stand has been completely redesigned for this year’s shows and integrates the lifestyle experience into the models,” Reiss notes. “So, for instance, you don’t just see a crossover, but rather a lifestyle you can identify with. There is merchandise that consumers can buy, a social media station, a button-making stand and in the truck area on the lower level they have a BraunAbility Explorer that lets customers see and experience how they can still have the style, capability and fun they want in an SUV.”

Representatives of the automakers and their agencies were on hand to receive the remaining awards on Thursday after the conclusion of MediaPost's Marketing:Automotive conference.

Marketer of the year went to Thomas J. Doll, President, COO, Subaru Of America, who shared with the audience "Dog Tested," which debuted during the Super Bowl and is one of his favorite spots.

The best Web site went to Jeep.com and the award was accepted by Eileen Wunderlich, manager, marketing communications at Chrysler Group LLC.

The best interactive campaign was awarded to Jaguar, “Art of Performance Tour” and its agency partner, Spark 44. Accepting the award was Kim Kyaw of Jaguar and Tony Hobley of Spark 44.