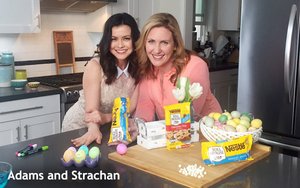 I don’t know what you are doing for Easter but i know what Nestle and the Reach Agency  wish you’d do and that’s to make “deliciously festive” Bunny Bottom Cookie Pops.

I probably won’t do it--check that; there’s no way I’ll be doing that--but the video for the recipe is the story of how social influencers and your basic international consumer packaged goods giant are coming together for fun, profit and the sale of Toll House Chocolate Chip products.

Nestle has been working with YouTuber Ashley Adams, who’s done videos for the Official Hungry channel  and YouTuber gathering spot "Feast or Fiction," and Elise Strachan, the Australian host of the popular “MyCupcakeAddiction” and coordinating with Reach to spray word of Nestle’s “Bake My Day” video series over social networks. Those two women, with thousands of followers on social sites, just mention the “Bake My Day” videos where they’re also hanging out, and if it works right, they bring a gang of fans with them.

The goal, says Nestle marketing manager Heather Green, is to get who she calls “the modern baker--not just millennials” to try recipes that use good old Toll House dough and chips. “It’s a well-respected brand but it may not always seem relevant. We want to get them taking their iPad into the kitchen and following along.”

Influencers do that, and so do recipes that play on something of a foodie trend: That's taking familiar food, and as Green explains, “putting a twist” on it.  That results in things like Chocolate Quesadillas  or the Bacon Chocolate Waffle Brunch. Whatever else can be said about them, they’re a lot more involved than the plain old chocolate chip cookie staid Toll House traditionalists are fond of munching.  Ashley Adams is quite the chipper chocolate chip cooker. “I was a cheerleader all my life,” she says in one video, as if we couldn’t have guessed.

Nestle’s arrangement with Reach as its video agency-- a still kind of a new term-- helped drive engagement for the brand and, pretty impressively, average viewtime for those videos clocks out at about two minutes. “That’s definitely not the norm,” says Gordon.

When the pizza brand started its pre-Super Bowl push, it skipped its planned TV spots and ran the online campaign ads instead.

Reach, with offices in San Francisco and Los Angeles has been around since 2012, which means it has been there for the gestation of the YouTuber influencer infusion into advertising. It’s gathered in clients including, Marriott,  Walmart  and Purina, another Nestle brand, among others.

“We met with Walmart for a solid year”  before that massive retailer got nudged toward a video agency,” Gordon recalls  “We spend a lot of time going to brands to explain even what an influencer can do,” he says.

He believes, in essence, that influencers exist in a world a typical ad agency shouldn’t be expected to be following very closely; the agency of record is usually working on long-term campaigns.

And you have to know where to find influencers. Though they may appear to be hiding in plain sight on various platforms, from YouTube to Instagram, Twitter and Vine, a video agency learns a language of correct length and environment.  Plus, Gordon says, the influencers--the talent-- need to be part of the process. “They are all creative people. They know what their fans want to watch, ” Gordon says. “You have to make it authentic, make them production partners,  or it just doesn’t work.”

But it does work. All those YouTube subscribers and other social sites ways of showing affection also drive engagement.  Gordon says to get doubting brand representatives to believe that power, what seals the deal is “taking people to Vidcon just to see all the fans. It works every time.”