Scripps' Upfront: Our Viewers Buy What They See 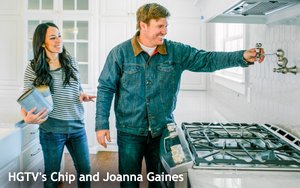 The Scripps cable channels are marching into upfront season confident in their ownership of the lifestyle categories that are their bread and butter -- home, food and travel.

It’s the message the company seeks to convey this year in its presentations to the advertising community.

Among the strengths Scripps is emphasizing: Its audiences are upscale, engaged with the programming on the Scripps networks (HGTV, Food Network, Cooking Channel, Travel Channel, DIY and Great American Country) and, Scripps claims, likely to buy what they see being advertised.

“They do what they view and they buy what they see,” goes one line from the Scripps presentation, which was previewed for members of the press Tuesday morning in New York. The ad community was due to see the formal presentation late Tuesday afternoon.

Anchored by the tagline “Life lives here,” the company’s presentation emphasizes three main points -- ratings growth, the quality of its audiences and the experience of its sales staff.

“With our ratings being up, we’re delivering our advertisers’ schedules,” said Jon Steinlauf, executive vice president of advertising sales and marketing for Scripps Networks Interactive.

“Secondly, our audiences are upscale and engaged,” he said at the morning press preview. “And when they watch lifestyle content, they’re inspired to take action. That means they’re more likely to buy what our clients are selling,” he said, driving home this point more than once.

“And finally, we have an experienced marketing-driven sales force. Most of them have been with Scripps for over a decade. They have the expertise and insights to create big ideas to help our clients’ businesses grow. We do all this by being laser-focused on single-genre networks in the home, food and travel categories.”

Steinlauf noted one element in the Scripps success equation that has long been important for the company’s networks and its viewers: The company produces 2,500 hours of new content every year. That means reruns are scarce. And when viewers tune into a Scripps network, they are far more likely to see a new episode of a show than a repeat.

It’s a strategy the company has adopted to build “live” viewing. “It delivers many benefits to advertisers, including loyal consumers who watch our content live,” Steinlauf said of the company’s efforts to limit repeats. “Those live, real-time impressions are the best ones that any client can buy,” his message continued.

Where programming is concerned, Scripps’ presentation is emphasizing the strengths -- and viewer loyalty -- of its established hits and personalities, including HGTV’s “Property Brothers” Jonathan and Drew Scott, and married renovators Chip and Joanna Gaines from “Fixer Upper”; Travel Channel foodie Andrew Zimmern; master contractor Mike Holmes on DIY; the many famed chefs of Food Network (from Bobby Flay to Rachael Ray); and others.

The company is also emphasizing its ability to draw top stars, such as Ellen DeGeneres, who is already established on HGTV with her show “Ellen’s Design Challenge.”

This year’s big “get” for Scripps is Queen Latifah, who will take viewers on a trip to Rio De Janeiro for the new Travel Channel series called “The Best Place to Be,” featuring celebrities in exotic locations.

Other new celebrity-focused travel series announced Tuesday include “Celebrity Adventure Club,” featuring stars on far-flung journeys; and “Wild Things with Dominic Monaghan,” starring Monaghan (star of TV’s “Lost” and the “Lord of the Rings” movies) on nature excursions around the world.

HGTV’s new shows continue the network’s emphasis on family members in the renovation and real estate businesses. The new show called “Listed Sisters” features siblings Alana and Lex LeBlanc of Nashville, who will be seen renovating homes and setting them up for sale. And another new show, “Good Bones,” features the mother-daughter duo of Karen Laine and Mina Starsiak renovating homes in Indianapolis.

Among the new shows on Food Network is one called “12 Hungry Yelpers,” in which restaurant critics on Yelp help failing restaurants turn themselves around.

A portion of the Scripps presentation is given over to opportunities for sponsor partnerships.

Clients whose brands have been featured within Scripps programming ranged from Lowe’s, which has partnered with HGTV practically since the network began, to Lea & Perrins, the Worcestershire Sauce brand now owned by Heinz that had not been on TV for 50 years until it began recently to be seen on Food Network shows such as “Chopped: Grill Masters.”