Cox Gets To The Emotional Root Of TV's 'Golden Age' 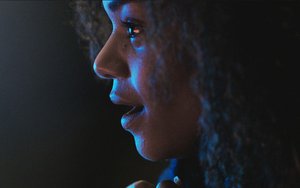 This may be the so-called “golden age” of television, but if a viewer can’t find the programming he or she wants, that designation doesn’t amount to much.

Cox Communications is launching its new advanced Contour television services (which features more immersive graphics, a voice-controlled remote and predictive search) with a new integrated marketing campaign agency Doner that, according to the effort, helps users “Get right to the good stuff.”

“Despite the fact that some people call this the 'golden age of television,' our research shows people are still feeling unfulfilled,” Lisa Nardone, executive vice president of brand leadership at Doner, tells Marketing Daily. “Consumers are encumbered by these [linear] viewing guides. Contour was designed to help them get to an experience that’s intuitive and personal.”

A new television commercial uses close-ups of facial features and expressions intercut with Contour’s interface for an emotional appeal. A close-up of an eye watching a screen is accompanied by a voiceover saying “Speak.” The shot cuts to a mouth saying “drama” into a voice-activated remote and a list of choices on the interface with the voiceover saying “find.” The next shot shows a tear running down a cheek as the word “feel” is spoken. The commercial then goes on to show kids laughing while using the “Kids Zone” feature and people using tablets to watch their programming. As the voiceover ticks off more emotions and people have more reactions to the program, the commercial concludes with the voiceover saying “be speechless.”

“We want to own a territory that other technology companies aren’t owning, which is the emotional connection [of programing],” Dan Margulis, group creative director at Doner, tells Marketing Daily. “We wanted to reduce the whole equation to three steps: you speak, you find, you feel.”

In addition to the television commercial, the effort features print, out-of-home and digital elements, all showcasing the emotional benefit of finding the program a user wants right when he or she wants it in “dramatically intense and arresting ways,” Margulis says. The effort is rolling out national in markets that Cox services.