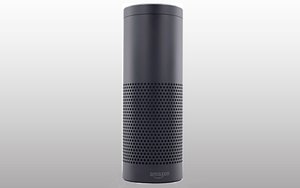 Consumers who buy Amazon Echo generally love it. While some say it has become way too easy to make online purchases through Amazon, many love it for its ability to play music, answer complex questions, find local movies and times, provide directions, get sports scores, and read books to the kids.

The voice-activated gadget has become part of the family for many households, with some parents calling Alexa -- the voice assistant -- another person in the home. Others call Alexa their new best friend.

"Amazon Echo is a transformative piece of technology, hardware/software," writes Jeff Rutherford in a Facebook post. "I feel like we've got a fourth person in our house now," he wrote. "After four days, the boys are still completely enamored with Alexa."

Rutherford went to the gym one Saturday morning and when he got back he asked one son what he'd been doing. He had spent half the time talking to Alexa, asking lots of questions about religion, science, and more.

His boys still love the gadget, he told SearchBlog. It connects to Audible and his eight-year old has Alexa read stories.

Others on Facebook call Alexa their new best friend. Some parents say the biggest issue is manners. Alexa does not require a "please" before the request or a "thank you" after carrying out request. All that is required to activate an action is her name, Alexa.

"I fear it’s also turning our daughter into a raging asshole, because Alexa tolerates poor manners," Hunter Walk wrote on Medium. He says learning at a young age requires repetitive actions, and he's not sure whether "kids get why you can boss Alexa around but not a person."

As Walk puts it, Amazon clearly has a hit on their hands, but the voice response system needs a little tweaking.

Really, what harm would it do to reinforce a little manners? Even for adults. Change the prompt command to respond on "Alexa, please," and "Alexa, thank you," rather than just the name.

Walk's post reminds me of the fiasco Microsoft went through recently with its Artificial Intelligence Twitter chatbot, Tay.Ai, which learned from experience. In less than 24 hours, Microsoft's chat bot Tay.Ai gained more than 50,000 followers and produced nearly 100,000 tweets. But the experiment from Microsoft's Technology and Research and Bing Teams fell apart after the artificial technology turned into a Hitler-loving, feminist-hating monster.