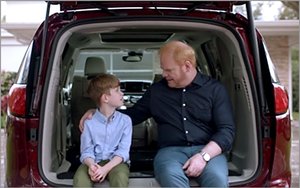 Chrysler is going after Millennial dads in a campaign for the 2017 Chrysler Pacifica starring comedian Jim Gaffigan.

In the spots, from Doner, Southfield, Michigan, Gaffigan leverages various Pacifica features to improve his "Dad Brand" in a comedic, tongue-in-cheek fashion while highlighting the vehicle’s functionality, versatility, technology and safety features.

“For this campaign, it was important to challenge the paradigm,” Francois tells Marketing Daily. “Minivans are not generally regarded as sexy, but something that you sell to a population which is value-driven and practicality-conscious.”

Chrysler “invented” the minivan 33 years ago, and the automaker has the goal of “owning” the category once again, Francois says.

“To do that, we had to reinvent our minivan from the ground up,” he says. “Making a good minivan is extremely complicated. It means make it very reliable, safe, fun to drive, innovative when it comes to clever interiors, clever seat solutions, clever infotainment. This is how we conceived Pacifica. You are shopping a car to just your needs…with relatively modest expectations. And (with the all-new 2017 Chrysler Pacifica) you end up with a private jet experience.”

The same way the automaker "challenged the paradigm" on the product standpoint, it also had to challenge its marketing, he says.

“It’s a soccer mom customer?” Francois asks. “Great. We will put a Dad in driver seat. Minivans speak to a conventional language -- soft, kind considerate? Great. We will leave conventions behind and speak in a real-life language. So -- we had to pick a REAL dad. We didn’t look for an endorser at any cost, but for a REAL dad with a real point-on-view on fatherhood and the challenges of modern-day parenting. “

Gaffigan happens to perfectly fit the profile, he says

“He has five children -- all five in a 3-12 age range typical of minivan buyers,” Francois says. “He is married to his business partner wife. They both work full-time. They have an active schedule with their children, and they are always on the go. We were not looking for just a famous face. We were looking for the epitome of the American minivan family, and Jim brings both.”

Additional spots will begin airing across television and digital/online throughout the coming weeks and months across national broadcast, including prime time. The campaign includes nine different ads in total with Gaffigan, his wife Jeannie and their five children, who range in age from three to 12.

The effort will span across television, print, digital and social channels. The campaign debuts with TV and online spots.

“It’s a huge campaign and the ads we were able to share with you at this moment are just a sampler, an appetizer,” Francois says. “We are set to explore all the features one by one, as more commercials and videos roll out in the coming weeks and months, including a focus on the minivan segment first, our 80-mpge hybrid model.”

Chrysler did not test Gaffigan with focus groups, Francois says. “His name was brought to us by our social media agency, Media Brands, for a social initiative for the all-new 2017 Chrysler Pacifica,” he says. “After seeing him and his family, including his wife and five children, we knew we were onto something for the advertising campaign, which centered on our ‘Dad Brand’ theme.”

Gaffigan is the star of his own sitcom on TV Land and also plays “Colonel Sanders” in KFC advertising.

The Pacifica replaces the Town & Country minivan and the Dodge Grand Caravan. The minivan segment has faced sales declines as a result of consumers' growing preference for crossovers and SUVs. Sales of all minivans in the U.S. have declined  to just over 500,000 last year from about 1.37 million annually in 2000.