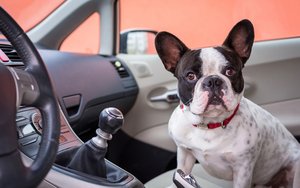 Acura owners are much more likely to have a Poodle than any other breed. And Yorkshire Terrier owners have a penchant for Honda products.

Dog and cat ownership influences automotive brand choice, while multiple pet ownership--as well as affinity for certain breeds--can indicate a much higher preference, according to the report.

Issued in celebration of National Pet Day earlier this week, the report stems from a poll conducted by Harvard Applied Mathematics students. More than 3,000 pet-owning respondents were asked to identify the automotive brands parked in their garages, and the type and number of pets hanging out in their living rooms.

• Respondents who lived only with dogs were significantly more likely to own vehicles from Hyundai, Volvo or Lincoln.

• Every owner of a Lincoln or an Audi reported having either a dog or a cat.

• As the number of cats a respondent owns increased, the more likely they were to drive a Subaru.

• Respondents with more than one dog favored Hyundai models.

• Ford owners are passionate about Rottweilers.

• The strongest brand identification for Bulldog ownership is with Ford, at 22% more likely, and Cadillac at 17% more likely.

“We did this survey with Car Talk because we noticed that their audience is almost as into their pets as they are into their cars,” BestRide Editor-in-chief Craig Fitzgerald tells Marketing Daily. “When we asked for pet photos a while back, we were inundated with responses. But to my knowledge, nobody's done any kind of research on pet ownership and the relationship to automotive brands.”

“When you think about all the car commercials you've seen in the last 20 years, you can probably pick out 10 that are dog-focused, beginning with Nissan's "Dogs Love Trucks" television campaign in the 1990s,” Fitzgerald says.

You're a lot more likely to see a dog happily riding in a car than a cat, he notes.

“I can't think of a single ad that featured a cat, and when I tried to find an example, I had to dig one up from a campaign in New Zealand,” he says.

Car brands like to associate themselves with all kinds of things that have nothing to do with driving.

“Maybe Subaru and Mazda should show owners loading flats of cat food in the trunk instead of showing people base jumping and mountain biking," Fitzgerald says. “The popularity of crazy cat videos plus this data on cat ownership has to equal something, right?”

“That’s funny given that Subaru has gone out of its way to offer tons of dog friendly accessories – they even have a “Pet Hall of Fame,” he notes. “And dogs figure prominently into their advertising.”

The connection between Ford and tough dogs makes sense.

“Imagine all the Ford sales that are F-Series trucks then try to imagine those customers with yelping, shivering Teacup Poodles,” Moody says. “Rottweilers and Bulldogs make more sense.”

As for respondents with more than one dog favoring Hyundai, that connection is solid “because all their money goes toward dog food and chew toys. Those people need a car that’s inexpensive and will last a long time.”