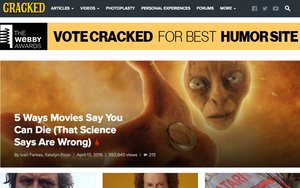 Scripps will buy Cracked from its current owner, Demand Media, for $39 million. Ad-supported Cracked had revenue in 2015 of about $11 million.

“We really believe Millennial audiences connect with content that is authentically in their voice, and Cracked does that,” he said. “We are not alone in seeing how important humor is as a vehicle through which younger audiences dissect the world. Brands and agencies are recognizing how important comedy and satire is for them to connect with.”

Headquartered in Santa Monica, California, Cracked launched in 1958 as a humor magazine. In 2007, Demand Media purchased the brand and focused its efforts on growing the Web site Cracked.com.

The Cracked team will continue to operate out of its Santa Monica offices and will be led by General Manager and Vice President Mandy Ng Rusin and Jack O’Brien, vice president and editor in chief.

Ng Rusin stated that they will continue to focus on “original journalism, social commentary and pop culture analysis, all through a comedic lens.”

She added, “Our companies share a nimble approach to testing new digital platforms to reach and engage audiences and advertisers.”

Cracked has been “very successful” at developing branded content and native advertising campaigns for big brands and agencies, Symson said.

Half of Cracked.com’s audience (made up of mostly affluent millennial males) comes directly to the site, and users spend an average of eight minutes engaging with the text and video. Cracked brought in about 8 million unique visitors in February -- a 12% jump from the same period last year -- making it one of the top 10 humor sites on comScore.

Going forward, Symson said Scripps will help Cracked build its brand on the Web, in over-the-top video and audio and other emerging digital platforms. He said they will use what they learned from shifting digital news platform Newsy (which it bought in 2013) to an OTT video news brand.

“We hope that we’ll see the Cracked team became a natural extension for the OTT side of the business,” he said.

Symson added that Scripps will continue to focus on adding businesses to their portfolio that connect to younger audiences in new marketplaces for content.