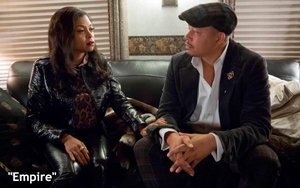 TV One struck a down-to-the-wire deal to air off-network repeats of Fox’s “Empire” just hours before the African-American cable network was set to deliver its upfront presentation to media buyers and members of the press Thursday morning.

By 9 a.m. Thursday, its “Empire” coup was a highlight of the network’s breakfast-time presentation in New York.

“We had a really big day yesterday, and we were working feverishly to get a little deal done,” said TV One President Brad Siegel. TV One’s deal for “Empire” makes TV One the first TV outlet other than Fox to air the high-rated drama about the feuding family behind a fictional music company.

Plans call for repeats of “Empire” to begin airing on TV One in May. The deal is unusual because “Empire” has only been on Fox for two seasons amounting to just 30 episodes. (It has been renewed for a third season.) Traditionally, network TV shows don’t become available for off-network syndication until they have four seasons -- or just shy of 100 episodes -- under their belts.

“The beauty of this [deal] is that you don’t have to wait four years for this show to come to [off-network] TV,” Siegel said. “The thing I can promise is we are going to sell it at a discount to what Fox is selling it for!” he told his audience of media buyers.

Like other networks making their upfront pitches at this time of year, 12-year-old TV One is emphasizing its growth -- particularly in its production of original series and made-for-TV movies.

TV One intends to continue growing its slate of originals in both scripted and non-scripted categories, including its first original scripted drama. The network is also continuing and strengthening its commitment to TV-movie production, vowing to premiere 26 original movies in the 2016-17 season, according to D’Angela Proctor, senior vice president of original programming and production.

No details about TV One’s new drama series were forthcoming, however. In her portion of Thursday morning’s presentation, Proctor indicated that the project has not reached the announcement stage in its development. But she promised that the show-runner would be someone with a track record that would impress. Expect an announcement in the next few weeks.

TV One was able to announce two new reality shows, plus a game show. One of the reality shows is “Sneaker Pawn,” about a 16 year-old African-American entrepreneur in New York who has become a dealer in high-end, collectible sneakers -- a business in which he employs his own father. The other reality show is “Family Bond” about another family business -- a North Carolina bail bonds firm.

TV One’s new game show is called “The Dating Games.” It will have teams of contestants watching video of two people on a date, and then hazarding guesses about the the couple’s status, their relationship and their prospects for more dates. The winning team is the one that makes the most correct guesses.

On the TV movie front, TV One announced a number of titles, including “A Mother’s Worst Nightmare: The Murder of Trayvon Murder,” a TV-movie telling of the Trayvon Martin story. TV One is also working on a TV-movie about the musical DeBarge family titled “All This Love: The DeBarge Family Story.”