Google Scans Billions Of Android Apps, Too Many In High-Risk Security Category 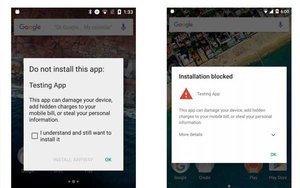 Google's motivation to keep app users safe as they search for information and explore new ways to make their life easier through mobile devices points to helping consumers feel secure and free from malware and hackers. The safer consumers feel, the more they will use the apps and mobile Web and interact with branded content and paid-search ads.

In Google's second annual report on the state of Android security, the company says it now scans six billion Android apps daily on smartphones around the world to look for potentially harmful apps (PHAs), but another report suggests Android apps still fall into a higher-risk category. Too many are at risk of leaking consumer data.

In 2015, PHAs were installed on less than 0.15% of devices that only get apps from Google Play. Include all devices in the Android ecosystem using Google's services, such as apps from third-party app stores, and this rises to 0.5%, up from 1% from the prior year.

Not all security improvements are technical, per the report. Some come from understanding user behavior and making the easiest choice also the safest by adding red exclamation marks to signal a user's full attention. These changes resulted in the effectiveness of the PHA warnings provided by Verify Apps by more than 50%.

Separately, one report from Appthority notes that several tax apps could put personal information of users at risk from hackers. The San Francisco-based company found some of the more common tax application such as MyBlock from H&R Block exhibited more risky behavior than their iOS counterparts.

Along with the Android version of H&R Block’s MyBlock app, the iOS version of TaxBot, and an Android app known as Calculator for U.S. Taxes also fell into the high-risk category.

Apps in the lower-risk category range from the iOS versions of Evernote, TurboTax, Expensify, Quick Tax References, MyBlock, IRS’s own mobile app IRS2Go, MyTaxRefund, and TaxCaster, according to one report.