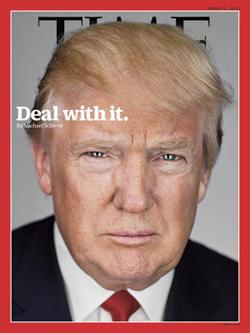 When Donald Trump appears on a magazine's cover, more readers were attracted to read that issue, according to new research from GfK MRI.

“Overall, we really saw a lift across all of these demographics for the Trump covers,” Mickey Galin, EVP, research development at GfK, told Publishers Daily.

The study found that when Trump is slapped on the cover, there was a notable increase in readership for the issue, in comparison to other issues of the same magazine.

The biggest impact was among adult men who live in households with annual incomes under $50,000. But even readers in higher income brackets were more likely to read the magazines featuring Trump.

For example, adults in households with incomes between $50,000 and $75,000 were 15% more likely to read those issues featuring Trump on the cover.

“While our data does not suggest who will or will not end up voting for Trump, he certainly has the power to make specific magazine issues very appealing. This ‘Trump bump’ is exactly what publishers want,” Galin stated.

This translates into additional pickups of a brand’s publication — and an opportunity to connect with consumers, Galin added.

“The current election cycle and some of the candidates, in particular Donald Trump, are generating a lot of interest with Americans,” she told PD. “This increased interest provokes consumers to seek out information. Magazines are a trusted medium to satisfy that heightened desire for information.”

“Given that our study is a weekly study, we are continuing to watch for additional issues across any title that we measure that include Trump on the cover,” Galin said. “I’m pretty sure that we’ll see a continuation of this Trump bump effect at least in the near future.”

GfK MRI, a provider of media and consumer research in the U.S., surveyed adults about their readership of 16 issues within six magazine genres between July 2015 and February 2016. The magazine titles include Bloomberg Businessweek, Esquire, Forbes, National Enquirer, New York Magazine, New York Times Magazine, People, Rolling Stone, The Economist, The New Yorker, Time and Us Weekly.

GfK MRI found that men were 17% more likely to have read or looked into one of the Trump issues, compared to issues without Trump, and those with annual incomes under $50,000 were 32% more likely.