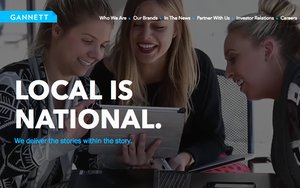 Yesterday, Gannett went public with its proposal to acquire Tribune Publishing Company. Today, the CEOs of both companies are taking turns in a game of he-said-she-said.

Tribune Publishing CEO Justin Dearborn said in a letter dated Monday — made public in a regulatory filing Tuesday — that Gannett CEO Robert Dickey was “playing games” during the proposal process. Dearborn added that Gannett is being “erratic and unreliable.”

“We do not understand why you found our response to your proposal to be inadequate,” Dearborn wrote, adding that he had communicated with Dickey “numerous times” in writing and on the phone, before Gannett went public with its offer.

“Our entire team was surprised and confused by your decision to cease discussions regarding a reasonable path forward and to adopt the aggressive and hostile approach you have undertaken,” Dearborn said.

The biggest point of contention between the two CEOs seems to be a dinner scheduled for April 18 in Washington D.C.

This morning, Dickey responded in a letter saying he was “heartened” to hear that Tribune was considering its proposal.

But according to Dickey, the meeting scheduled in April was in fact a “social dinner” at the Newspaper Association of America convention.

Dickey claims that the Tribune representative who would have attended the dinner would have “not been made aware of our offer, so no substantive discussion could have taken place.”

Instead, Gannett chose to host a dinner to welcome publishers from Journal Media Group, a company it had acquired a few weeks prior.

“We are eager to negotiate a transaction with Tribune. We believe that we can provide your shareholders with the best available price, and we expect you would give us a full and fair opportunity to achieve that result. Please let us know when and where you would like to meet,” Dickey concluded.

Gannett is offering $815 million in cash to acquire Tribune. At $12.25 a share, the offer is a 63% premium based on Tribune’s closing price of $7.52 a share on Friday. Gannett’s deal also includes the assumption of $390 million of Tribune’s debt outstanding as of Dec. 31, 2015.
deals, m&a, newspapers
Next story loading