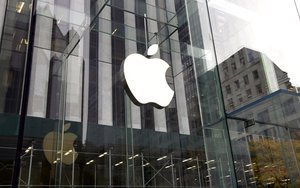 For the first time in 13 years, Apple failed to report quarterly growth.

Instead, the tech giant said Tuesday that revenue fell 13% to $50.6 billion during its fiscal second quarter, while net income fell 22% to $10.5 billion during the period, which ended in March.

Tim Cook, Apple's CEO, blamed the performance on what he called “strong macroeconomic headwinds.” Along with a windy world economy, sagging iPhone sales are chiefly to blame.

Partly as a result, Apple is expecting sales between $41 billion and $43 billion, next quarter -- off of the $47 billion that analysts were expecting.

Apple has reason to be optimistic, however. During the fourth quarter, the tech giant said its active-install base surpassed a billion devices for the first time ever.

From iPhones to iPads to Macs to Apple Watches, the number of gadgets syncing with Apple’s services increased by a healthy 25%, year-over-year.

Piper Jaffray analyst Gene Munster agrees. “We believe shares of AAPL could achieve upside of over 50% from current levels by the iPhone 7 launch in September,” Munster wrote in his own note.