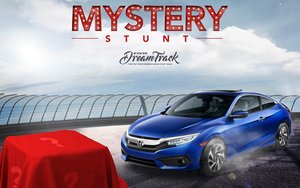 Honda is building the first-ever crowdsourced racetrack to tout the performance of the all-new Civic Coupe, which recently arrived at dealerships.

The automaker is leveraging Facebook and Twitter, asking fans for ideas on how to create the ultimate “Dream Track” (#CivicDreamTrack). If their suggestion gets used in the making of the stunt track, that fan will get a special shout-out from Honda.

Upcoming social posts will ask fans for all sorts of ideas for the Civic Coupe’s “Dream Track,” from deciding on what a giant, 12-foot piñata should look like and be filled with, to coming up with their own crazy stunts from scratch. A video of the “Dream Track” will debut across Honda social channels in mid-June. Sneak peeks will also be featured on Honda’s Snapchat.

“They are looking for a car that is distinctive and responsible, but also stylish with high performance,” Rossick tells Marketing Daily. “While we created the ‘Civic Dream Track’ campaign to entertain all of our fans, we especially want to engage with those who share these same attributes as Civic Coupe buyers and also everyone who we connect with on social media.”