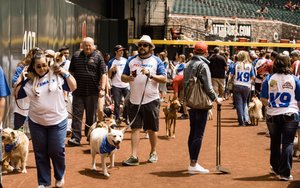 PetSmart, in partnership with the Arizona Diamondbacks, nearly set a new Guinness World Records title for the “Most Dogs Attending a Sporting Event” at Chase Field in Phoenix.

Although they came just shy of the 1,000-dog goal, they still doubled the number of dogs from previous Bark at the Park events at Chase Field with 858 dogs in attendance on May 1, including several who ended up getting adopted to new homes as a result of the event.

This feat speaks to pet parents’ enthusiasm for including their best friends in activities, says Joice Wirkus, VP of retail marketing, PetSmart.

“Our main goal was to see if we could set the record and get hundreds of dogs to the stadium to show the world how truly dog-friendly Chase Field is — at the world record level,” Wirkus tells Marketing Daily. “Chase Field is the most dog-friendly ballpark in America. We had such positive response, you just never know what we’ll do down the road.”

The Guinness World Records attempt was heavily aided by the national kickoff of Bark at the Park at Chase Field, a traveling 12-game dog-friendly program where dog-loving fans can bring their best friends to a baseball game at stadiums across America. This year’s Bark at the Park program is hosted by Central Garden & Pet, the parent company of Nylabone and AvoDerm Natural Pet Foods, as well as PetSmart.

The promotion was executed by PetSmart’s in-house PR team with heavily supported from Golin, PetSmart’s PR agency team out of Dallas.

Dogs and their pet parents can continue to take in D-backs games on the PetSmart Patio during the Dog Days of Summer, where all Sunday home games are dog-friendly. The PetSmart Patio features 30 “doggie suites” each accommodating four humans and one dog and all the human and doggie treats fans can eat.