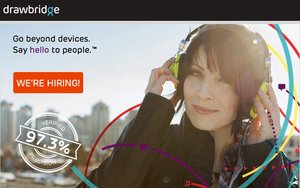 Drawbridge, a digital identity company that offers a range of services and functions, announced that it has raised $25 million in a series C round led by Sequoia Capital.

The money will be used to expand Drawbridge’s core offering to help companies connect and resolve fragmented audience identities and serve ads across devices and channels.

“Providing customers with a unified experience across devices is one of the biggest challenges facing the Fortune 500, particularly given the walled gardens of Facebook and Google,” stated Jim Goetz, a partner at Sequoia.

“In the first six years as a company, Drawbridge has seen the market shift from skepticism about the need for and validity of an independent cross-device identity solution to early traction,” stated Kamakshi Sivaramakrishnan, founder and CEO of Drawbridge.

The company projected a $100 million run-rate based on its performance in Q4.

Drawbridge started offering a software as a service (SaaS) model to its customers about a month ago, and is encouraging them to dip into self-service more. The company has partnerships with M&C Saatchi Mobile, Lyft, and Oracle.

Other investors include Kleiner Perkins Caufield Byers and Northgate Capital. This latest round brings the company’s total funding to $45.5 million.