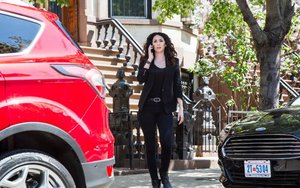 Ford Motor Co. has partnered with NBC to integrate the 2017 Ford Escape into two prime-time shows, “The Blacklist” and “Blindspot.”

“The Blacklist” actress Mozhan Marnò, who plays FBI agent Samar Navabi, interacts with new Ford Escape in TV spots, continuing a three-year relationship between automaker and the TV show. Spots during “Blindspot” feature actress Ashley Johnson in character as FBI agent Patterson analyzing a new Escape as if it were a crime scene.

The custom content will air throughout May in pieces jointly created by Ford and NBC.  The narrative will highlight various features on the 2017 Escape, including the available Sync connectivity.

The spots also will direct viewers to continue the experience at NBC.com, where they can enter for the chance to win a Ford Escape in the “Make Your Escape” sweepstakes, says Ginger Kasanic, Ford media integration manager.

“Both ‘Blindspot’ and ‘The Blacklist’ really tap into the ‘restless spirit’ of the Ford utility vehicle customers,” Kasanic tells Marketing Daily. “We know our fans are voracious consumers of life , and they better themselves by going out and doing, trying, experiencing -- which are inherent to the ideas in these shows.”