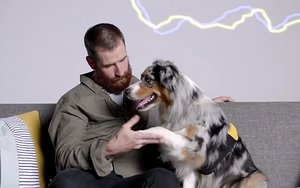 Pedigree is promoting a research project it sponsored that shows dogs' and owners’ hearts actually align to reduce stress.

Clemenger BBDO in Australia created a video to detail the experiment.  For every time the video is shared on Facebook using the hashtag #HeartsAligned, Pedigree will donate $1 to PetRescue.

The video has been viewed more than 400,000 times on YouTube.

It’s well known that pets are good for helping lower stress levels. However, the research commissioned by Pedigree Australia reveals that the impact is more profound than previously thought.

Conducted by canine welfare scientist Mia Cobb and human performance specialist Dr. Craig Duncan, the test involved heart monitors being placed on both animals and owners. They were then separated. When they were reunited, their heartbeats and anxiety levels dropped dramatically.

Then something remarkable happened: their heart rhythms actually aligned.

The emotional demonstration shows the heart rhythms of both owner and dog physically aligning and dropping to the same healthy level, just by being close to each other.

“One in four of us suffers from stress and anxiety -- they are major health issues for all of us,” said Dr. Duncan in a release. “I was so astonished by the heart alignment result; I would have never thought that the configuration of the heart beats would be in sync as much as they were.”