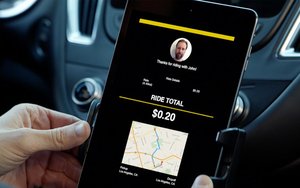 Chevrolet is emphasizing the 2016 Malibu Hybrid’s gas thrift in an introductory spot created by Commonwealth // McCann.

The premise of “Unexpected Fare” is that real people. not actors, are told they are “testing a new car service” but it’s actually a test ride of the Chevy Malibu Hybrid. The twist is that when it comes time to pay the fare, the friendly driver tells them it’s a based on gas consumption.

“Since we traveled 4.43 miles and since this car offers an EPA-estimated 47 miles-per-gallon city, your total is …” at which point he flips the screen and shows the fare “… 20 cents.”  Another rider’s fare is only 8 cents, while a couple is charged 23 cents for their ride.

The riders are amazed and delighted with the low fare. “No way!” says one rider. “Do you have a quarter?” one rider asks his co-rider.

The two-minute long-form spot lives on YouTube while a 30-second version is running on TV for the next 60 days.

“‘Unexpected Fare’ is our first spot that begins to detail key messaging and consumer benefits of the new Malibu,” Kubitskey tells Marketing Daily. “The work so far has been introductory in nature, communicating that Malibu — the car you never expected — is here. The new work will detail specific features of the new Malibu like fuel economy. Look for other features to do be showcased in subsequent work later this year.”

The Malibu is a priority launch for Chevrolet this year and will include traditional media channels as well as cinema, social, mobile, experiential and high-profile media integrations, she says. The Malibu launch is the first of Chevy’s two major car launches this year, along with the Chevy Cruz.

“It features real people (not actors) discovering new and often surprising features in Chevrolet’s cars and trucks,” Kubitskey says. “This spot shows how the campaign can evolve outside of a traditional focus-group setting and into more lifestyle. No matter the setting, this campaign will continue to feature real people discovering Chevrolet’s outstanding product lineup.”