Where Do You Stand On This Kars4Kids Commercial? 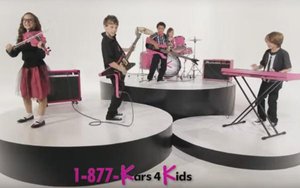 Writing an opinion column on the ubiquitous Kars4Kids commercial with the singing children presents several challenges, although having an opinion is not one of them.

That's the easy part. This commercial has got to be one of the most grating 30 seconds of advertising ever seen on television -- and that's saying a lot. In addition, it raises more questions than it answers -- most notably, what in the world is Kars4Kids anyway, and why would I give my car to these people?

But here's the challenge. If you're a TV columnist bent on criticizing the Kars4Kids commercial, then you run the risk of looking like you’re coming out against children and, in this case, a children's charity. And that's a no-no because kids are our future.

Those words -- “because kids are our future” -- happen to comprise the slogan for Kars4Kids, something I learned when I visited the Kars4Kids Web site. The slogan reminds me of the satirical song a group of schoolchildren once sang on “The Simpsons” called “Children Are Our Future.” This song poked fun at slogans such as the one adopted by Kars4Kids.

The hardest part of writing a critique like this is the part where you focus on the talent in the commercial because the talent here are all juveniles. And the last thing a critic wants to do is hurt a child’s feelings. Maybe it’s wishful thinking on my part, but I have a hunch these kids don’t read Television News Daily (but who knows?).

In the Kars4Kids spot, five children -- two girls and three boys -- are shown playing instruments in the manner of a rock band. But it’s evident from the get-go that none of them can play them, and they’re faking it badly. It then becomes doubtful they’re singing the jingle either.

So you watch this commercial and ask yourself: Why couldn’t they find a group of kids who could actually play these instruments (guitars, drums, a keyboard and a violin)? There must be plenty of talented children out there who can sing and play. Then you ask: Whose kids are these anyway? The answer that occurs to you is: Maybe they’re the offspring of people closely associated with this Kars4Kids charity. Who else would cast them in this spot?

One of the prevailing mysteries of this commercial is its ubiquity. No other charity group that I can think of maintains a presence on TV like Kars4Kids. The spot seems to run primarily on certain lower-rated cable networks, where the ad rates are presumably cheaper. For example, just the other night, it ran during every single commercial pod that aired during a show I was watching on AHC -- the American Heroes Channel owned by Discovery Networks that airs a lot of World War II documentaries. This one was about Hitler (this channel has a lot of Hitler shows).

A deep dive into the Kars4Kids Web site reveals that it’s a charity that is supported “largely through the funding of Oorah, a national nonprofit organization.”

Then you learn by clicking on an Oorah link that Oorah runs programs that include “tutoring and homework assistance, Jewish summer camps with a strong component of one-on-one mentoring, food and gift packages for major holidays, enrollment and tuition payment for children in Jewish private schools, one-on-one adult education and/or mentoring for parents, clothing donations, school-family liaison, family retreats, holiday gatherings, as well as financial assistance to meet a wide variety of individual needs.”

Some of these seem a little vague, but this list is not much different than the services and interests you would likely find on the Web sites of charitable organizations of all kinds and all faiths.

You won’t find any of this out from the commercial, whose aim is to get you to visit the Kars4Kids Web site or call an 877 number, which is repeated over and over in the Kars4Kids jingle. When you search the Web site, you can eventually come upon a page that explains how the car donation works (Kars4Kids also solicits donations of boats and real estate). Let’s say you have a car that’s in such bad shape no one will buy it. So Kars4Kids will tow it away for free and you can claim a tax deduction for a charitable donation. Kars4Kids then sells it for scrap or parts and makes money off of it.

advertising, cause-related, charity, children, tv
7 comments about "Where Do You Stand On This Kars4Kids Commercial? ".
Check to receive email when comments are posted.
Read more comments >
Next story loading