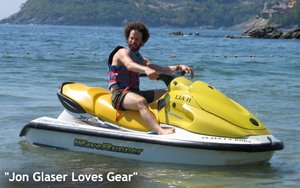 The network also announced an ambitious plan to significantly reduce the commercial load in its original series.

The announcements beef up the network’s growing list of originals and cements Tru’s efforts to relaunch itself as a full-on comedy network -- an effort begun in 2016.

“Having successfully relaunched truTV in 2014, we have now turned a corner when it comes to premium content,” said network President Chris Linn. “The new truTV is built around compelling, creator-driven shows featuring clear points of view and unique takes on different topics and formats, all told through a strong comedic lens.

"Armed with this momentum and a fresh slate of programming from a diverse group of talent, we are building on a solid foundation and brand promise that is breaking through and clearly resonating with a growing audience of highly coveted fans.”

“Jon Glaser Loves Gear,” described as a comedy docu-series starring actor/comedian Glaser, who apparently has a passion for grown-up toys and gadgets.

“Greatest Ever,” a pop-culture comedy countdown based largely on viral videos, hosted by comedian Amanda Seales.

“Lifescaping” (a working title), a “guide” to life skills such as how to get a bartender’s attention or determining when lying is the best policy -- hosted by Matthew Latkiewicz and Abbi Crutchfield.

Tru’s two new specials are an “Impractical Jokers Live Event Special,” scheduled for next fall and featuring the troupe of impractical jokers who star in the Tru series of the same name; and “The Problem with Apu,” a 90-minute special in which an Indian-American comedian, Hari Kondabolu, dissects and examines the long-running Indian-American character on “The Simpsons,” who runs the Kwik-E-Mart -- Apu Nahasapeemapetilon.

Tru renewed “Fameless” and “Hack My Life” and ordered additional episodes of “Comedy Knockout” and “Rachel Dratch’s Late Night Snack.” The anchors of Tru’s lineup – “Adam Ruins Everything,” “Billy on the Street,” “Impractical Jokers” and “The Carbonaro Effect” were all renewed previously.

This upfront season, Tru is emphasizing that its programming over the past year has resulted in lowering the median age of its audience by three years – to 35. One way, the network hopes to continue building viewership is by reducing commercial loads during its shows, the network said.

“Beginning [in the fourth quarter of 2016], all of the network’s 45 hours of original quarterly programming will drastically reduce their commercial loads resulting in 20% more content and giving the network the lowerst average commercial and promo time in all of television,” the network said.

“Chris [Linn] and the entire truTV team have delivered on their promise to develop a fresh, comedic environment with passionate, socially-engaged fans,” said Donna Speciale, president of Turner Ad Sales. “As we build on that promise with enhanced storytelling and low clutter, the truTV environment has become an exclusive must-buy for advertisers.”