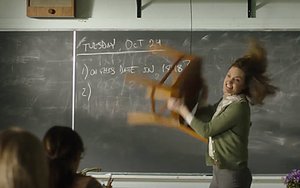 Jack Link’s — the jerky brand that continues to give us endless variations of “Messin’ With Sasquatch” videos — debuted an additional creative approach starting in 2014, with “Hangry Moments.”

Similar to Snickers’ “You’re not yourself when you’re hungry,” the “hangry” premise is that hunger unleashes angry behavior in people, which can be tamed by eating the high-protein jerky products.

The original “Hangry Moments” creative, from Carmichael Lynch, showed people in various social situations — e.g., trapped in the middle seat in an airplane — horrifying onlookers by suddenly experiencing loud hunger growls, followed by wild animals emerging, “Alien”-style, out of their abdomens. They revert to normal after chewing on Jack Link’s snacks.

Now the brand is unleashing a second “hangry” iteration, called “Hangry Hacks.” As with the past “hangry” and “Sasquatch” work, the new creative, from Mekanism, continues to play off the brand’s longtime tagline, “Feed your wild side.”

This time, a more how-to tack is employed. People are shown engaging in out-of-control behavior spurred by hunger pangs, then being transformed back into rational human beings after they break into nearby fire alarm boxes and eat jerky from the Jack Link’s packages that are inexplicably stashed inside.

For example, in one of the videos being for the campaign’s national television commercials, a mom flips out when her kids act up in the back seat during a family drive, but recovers her cool after eating Jack Link’s stashed in an emergency box in the console. Other videos show a teacher going postal in class (screen grab above), and a pro golfer going berserk during the last putt of his career (below).

Two more spots feature YouTube influencers. Geo Antoinette, an actress, producer and gym owner, stars in a vignette about a boss freaking out. The Hodge Twins and Josh Leyva, a sketch comedy YouTuber, are featured in a gym scenario.

“Office Freakout” and “Gym Beast” respectively pulled more than 61,000 and 67,000 views on YouTube within the first 24 hours of their posting.

In addition to broadcast and the brand’s YouTube channel, videos will be distributed on channels including ESPN and Hulu. The gym video is currently featured on the brand’s Twitter and Facebook channels.

Jack Link's will also run a “Hangry Hack-A-Thon,” hosted by competitive eater/YouTube personality “Furious Pete,” to give fans an opportunity to create their own hangry hacks. The UGC hacks will be unveiled during this year’s Maker Faire Bay Area, a three-day “celebration of invention, creativity and resourcefulness” set to be held in San Mateo, Calif., May 20-22.

The user creations and Maker Faire tie-in will be extended online through a video content series. Fans will be encouraged to vote for their favorite hangry hack on Jack Link's’ social channels.