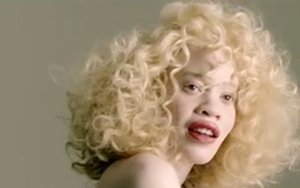 Add Burt’s Bees to the list of marketers looking to put their own spin on “femvertising,” with mini-documentaries meant to inspire young women to make the most of what Mother Nature has given them.

Even though the brand gets scarcely a mention, the three-minute videos, as well as the 15-second trailers, are meant to promote its all-natural moisturizing lipsticks. And while the stories of the two women are very different, the company hopes both represent its #LoveYourNature tagline, and that they will resonate with young women, boosting sales of its 8-hour moisturizing lipsticks. (Launched with a print campaign back in February, the $9 lipsticks are made from beeswax, raspberry seed oil and Vitamin E. )

In the first video, viewers meet fashion model Diandra Forrest, an African American woman with albinism, who describes her childhood in The Bronx, and how she learned to appreciate what made her different. And in the second, Mandy Harvey talks about how she learned to sing again after losing her hearing.

“Burt’s Bees has always valued staying true to who you are and what you believe — and that has been a large part of their success,” says Jennifer Hazelett, account director, Baldwin&. “It makes sense for them to celebrate women who do the same.”

Burt’s Bees, based in Durham, N.C., is owned by the Clorox Co., and Baldwin&, based in Raleigh, North Carolina, is the agency. The ads, aimed at women 18 to 34, are running as paid-social media on Facebook, Instagram and Pinterest; as well as native display ads on health & fitness, fashion and women’s lifestyle sites. Online, the campaign is  behaviorally pegged to inspirational websites. (AKQA is the media agency.)

Earlier this week, Clorox Co., which owns the brand, says its lifestyle division saw double-digit sales gains in the third quarter, driven primarily by innovation in Burt's Bees lip color and face care products, as well as gains in all in lip care products.