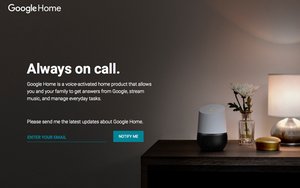 Google became one of the most valuable technology companies by building a search engine that processes billions of questions and queries that people type into the Web. Now it will process billions of voice searches as people become comfortable speaking to a virtual assistant in a home networking hub, once again changing the way people find and use information.

Sundar Pichai, Google CEO, wants to create an ongoing dialogue between the company's technology and users, he said during the Google i/o, developers' conference Wednesday. That conversation occurs through Google Assistant, rebranded from Google Now. It becomes the voice with which users interact with Home as well as the experience that links across devices such as tablets, smartphones and PCs.

About 20% of queries in its mobile app and on Android devices are voice searches, per Pichai, who said Google has invested the last decade in building a natural-language processor, which allows Google Assistant to follow the context of several queries when one follows the other. The ability to recognize sequences in language will change advertising. It brings search into the next phase where artificial intelligence removes the barriers of data stuck in silos.

This search platform of the "future where it is not a search list on a Web page, but how a smart product with a voice control responds to questions and how objects, walls, and rooms can be explored and linked with virtual data and visual information," writes Mark Skilton, professor of practice in the Information Systems and Management Group at the Warwick Business School, in an email.

Advertising will begin to take on the behavioral characteristics of consumers using Home, which will make it appear different from the blue links and images on the Web. Home will change the future of search advertising from lists on a Web page to audio recommendations and suggestions as Google processes data gathered from personal Web searches, exchanges with applications, email in Gmail, and now voice interactions with Google Assistant.

"Preemptively, it's making decisions on what you need," Dimitri Sirota, founder and CEO of BigID, a cybersecurity firm, told Search Marketing Daily. "You purchase a plane ticket and it adds the time and day on the schedule to your calendar."

Perhaps that holiday to the Bahamas requires buying a new pair of Havaianas flip flops. While Google collects a lot of data, once the consumer puts down the mobile phone the technology loses track, Sirota told Search Marketing Daily

On Wednesday, Google also announced Daydream, a more advanced virtual reality platform compared with Cardboard, the disposable headset released two years ago. It's a mobile system for the next version of Android N devices. The platform will only work on new phones with special sensors and screens. Eight hardware partners will support this project: Alcatel, Asus, HTC, Huawei, LG, Samsung, Xiaomi, and ZTE.