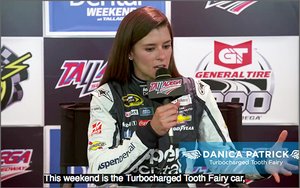 NASCAR drivers Danica Patrick and Tony Stewart are playing the Tooth Fairy on behalf of Aspen Dental to encourage consumers to visit the dentist.

The drivers recently surprised fans at the Talladega Superspeedway and the activity was captured on video. One fan was awarded a Chevrolet Camaro and whisked away in a helicopter to a nearby Aspen Dental practice.

The theme of the campaign is “What would it take to get you to go to the dentist?” Over the course of two days at the racetrack, fans also walked away with prizes including a fishing boat, an ATV, a cruise and a big-screen TV.

Patients nationwide are being urged to share their own “What Would it Take?” wishes via a Facebook comment or on their own social media profiles using the hashtag #AspenGetsIt. The “What Would It Take?” social campaign will run through 2016 and some of those wishes will be selected and fulfilled throughout the year.

“Obviously there’s great reach -- NASCAR reaches millions of fans across the country and has fans that really like to engage with and support sponsors of the sport,” Cardona tells Marketing Daily, adding that the fan demographics align well with the company. “These are hardworking, middle class Americans, the same people who are served by Aspen Dental practices.”

The NASCAR circuit is also really well-aligned to where Aspen Dental offices are located (currently 550 locations across 33 states), he says.

“What we love about Danica and Tony is their willingness to do the unexpected to help us create a conversation about a topic that people really don’t like to talk about -- oral health,” Cardona says. “The event in Talladega is a just another example of what good sports Danica and Tony are. Danica drove the Turbocharged Tooth Fairy car, which was a nod to her role in our latest TV campaign.”

The campaign is aimed at the more than 150 million American adults who didn’t visit the dentist last year. Not only is dentistry not at the top of the to-do list, but people face a lot of barriers to accessing care -- accessibility, cost, insurance and time, he says.

“We get it: the reality is that a lot of people don’t like going to the dentist, and we wanted to do an unexpected, fun, consumer engagement that would create conversation about the importance of good oral health,” Cardona says. “Through this campaign, we want folks to understand that the dentists and teams at Aspen Dental are willing to do virtually whatever it takes to make dentistry easier."