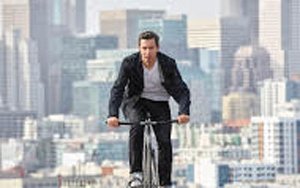 Coming in spring 2017, the jacket -- designed for urban cyclists -- becomes the first smart garment with Jacquard by Google technology woven in. The jacket allows users to stay connected with easy access to directions, information on nearby places, change their music, and answer calls just by touching the sleeve of their jacket.

The jacket uses conductive yarn woven into the fabric to create an interactive textile that links seamlessly with services and applications through interactive touch. The digital connectivity is provided through a smart tag, and apart from this detachable tag, the whole interactive garment is washable like denim.

Simple inputs like makes or taps on the jacket make the interface intuitive. The user has easy access to connect to the device’s functions controlling music and silencing calls, where the touch then registers wirelessly to a phone or tablet.

Levi's and Google announced the project last year at Google i/o 2015 and in a video explains how the technology works. The outcome of this year-long collaboration provides functions the rider can access while in motion.

An app allows the user to program the level of interaction with their device, and what features are most important, adjusting music volume, silencing a call, or getting an estimated time of arrival to their location.