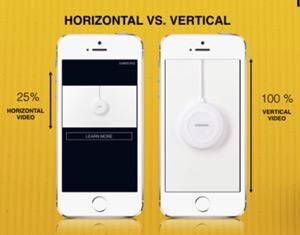 Advertisers have a heavy focus on mobile in-app inventory these days, much of which is being purchased programmatically. Think about it for a moment. When a video ad plays on your phone, typically it’s playing in horizontal mode similar to TV ads.

But what if the ads on your phone played vertically? InMobi, which focuses heavily on programmatic mobile video, maintains that after testing ad programs with the likes of Airbnb, Netflix and Samsung, the company discovered that most often “vertical video is more impactful for brands,” according to Kayla Wilson, head of  programmatic partnerships.

“Vertical video is a true mobile-first creative format,” she said.  To do vertical formats, the ad creative must be filmed in what’s known as portrait mode, with a 9 x 16 aspect ratio. With horizontal model, ads take up just 25% of the small screen. So, 25% vs. 100%. Which format would you choose?

But brands, agencies and the production companies must film ads in vertical mode to begin with. In-app ads play as part of an interstitial ad unit—in between articles, at the end of games or songs. They’re not static.

For a Samsung product ad, InMobi did a side-by-side comparison between vertical video vs. horizontal to find that there’s 4x more screen real estate being used with a vertical video ad format. That can add up to a more immersive experience for consumers.

Anne Frisbie, SVP of global brand & programmatic, InMobi, told RTBlog that creative production shops don’t often know about the impact vertical in-app mobile ads can make. Frisbie said that when Disney, for example, shoots video at its theme parks, it's shot horizontally. But the majority of the time, the video really should be shot in vertical mode.

Frisbie concedes that there is some in-app inventory that’s better in horizontal position—like games. For its part, InMobi accepts both vertical and horizontally filmed creative, “but what we see on our network is that the ideal experience, about 85% of the time, the ads should be in vertical mode, not horizontal mode,” Frisbie said. “We believe vertical video changes the consumer experience of video content. It’s a big shift in the creative position,” she said.

For the Samsung campaign InMobi studied, Frisbie said Samsung filmed in horizontal mode, but InMobi made the video vertical and the product was centered.

“It’s not so much about completion of an ad as much as engagement time after the video. The consumer may or may not sit through the end of the video, but because there’s a difference between a tiny ad and a big ad—there’s nothing else on the screen but the video experience—it’s very immersive,” Frisbie explained.

She also said that in mobile, 90% of brand advertiser buys have been rich-media creative. Also, Mobile Rich Media Ad Interface Definitions (MRAID), as defined by the Interactive Advertising Bureau, is coming to programmatic. “We finally have more advertising running that’s non-static in programmatic buys.”