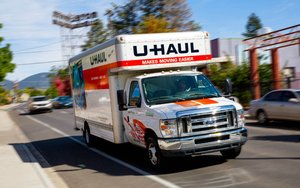 h the summer moving season right around the corner, U-Haul is announcing the Top 50 U.S. Destination Cities for the past calendar year.

Houston maintained the top spot in the rankings for the seventh consecutive year, receiving more one-way U-Haul truck rentals in 2015 than any other destination. Chicago, Orlando, Austin and San Antonio followed as Texas secured three of the top five destinations. Orlando climbed a pair of spots and Austin jumped three positions from their 2014 rankings, respectively.

U-Haul Destination Cities reflect the top drop-off locations for one-way U-Haul truck rentals and do not account for outgoing traffic from those cities. Every city is considered, regardless of size. Data is not stated as a percentage of population and is not necessarily reflective of growth.

The U-Haul migration trends report was compiled from more than 1.7 million one-way U-Haul truck transactions that occurred during 2015.

"Our migration data offers a comprehensive assessment of where people are traveling, because our growing network of 20,000-plus locations across the U.S. and Canada is unmatched in the do-it-yourself moving industry," U-Haul International, Inc. President John (J.T.) Taylor said in a release.