On May 24, 2016, Google announced the most significant changes to AdWords since, well, the invention of AdWords. It’s the second momentous change Google has made this year, after phasing out of the right-rail ads that started testing at the end of 2015 and became official this February. Now we’re looking at a substantial redesign. It begs the question “Why do these changes matter?” There are an incredible nine billion text ads on Google. These ads are a lifeline for innumerable businesses, and any change to them means these advertisers -- mom-and-pop shops, mid-market businesses and and billion-dollar global brand giants -- will have to react quickly, and probably spend more marketing dollars, to adjust and profit.

Most of what you’ve read so far about why Google decided to do this is accurate. User behavior has changed due to the searcher’s move to mobile, which has outpaced desktop searches. Right rail -- or sidebar -- ads don’t render properly on a mobile device. These ads aren’t maximizing clicks or transactions -- which doesn’t bode well for Google or advertisers. Ads on the top of the search results page make everyone happy: consumers click and transact, while Google and advertisers profit.

But with this change come challenges and opportunities. With Google’s new format, there are only four ads on the top of the search results page versus up to three ads on top, with another seven ads on the sidebar with the old format. With less real estate to compete with, advertisers that respond quickly to the changes will win big. 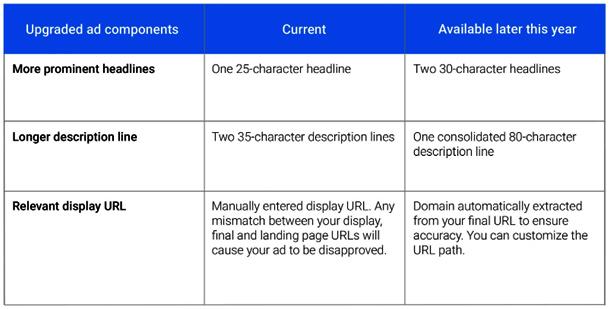 The new ad format allows for expanded text on the top line (headline) of over 30 extra characters, an extra “path” on the URL (line 2), and extra characters totaling 80 on the last line (description line).  But advertisers, be warned: mushing line one and line two descriptions together won’t work. Most advertisers write the two lines of text as separate ideas, and when they are pushed together these logically don’t flow as a cohesive message.

Advertisers that move quickly and adapt to the new format stand to benefit in two ways. First, advertisers that leverage the additional creative real estate can weave in new messages as they communicate to their customers that result in more clicks and purchases. Second, ads in the new format will look more aesthetically appealing compared to the older ads that do not read properly, which are displayed by advertisers that don’t switch over.

More Work Than You Think

As mentioned, Google has more than 9 billion ads at its disposal. Sure, some are created by templates so the number of unique ads is smaller, but we’re still talking about rewriting billions of ads, no matter how you slice it. Google has not publicly offered assistance for advertisers to tackle this issue. A significant amount of rewriting is required no matter how many unique or templated ads online advertisers use in their campaigns.

Don’t bet on technology to solve this for you either, given the aforementioned challenges with merging two separate ideas together. I’ve personally tried this approach, and it won’t work. I’ve spoken with big companies in the search ecosystem that can’t get this to work either. Google has indicated that the deadline for completing the rollover to the new formats is some time this fall. Multiple ads per ad group, multiple accounts, and many, many templates can only mean one thing: lots and lots of work.

It Will Cost You

Enterprise and SMB companies don’t have resources waiting on standby for work like this to pop up. Google’s AdWords change will mandate hiring internally, or partnering with an existing agency or starting a new agency relationship. Let’s do some math:

What’s the lesson for advertisers? Start looking for budget. Oh and get ready. You can bet that if Google is doing this now, their cousin in Redmond will follow suit in the next few months.