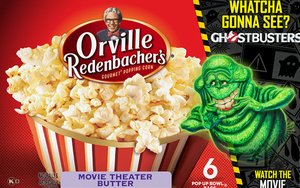 Orville Redenbacher’s has partnered with Sony Pictures on a “Ghostbusters” movie sweepstakes.

Packages of the ConAgra Foods’ popcorn are featuring the promotion, which offers a variety of movie-themed prizes.

“Popcorn is the #1 snack for movie-watching in both theaters and at home, and Orville Redenbacher’s is the #1 brand in both venues, so movie tie-ins have always been very important for us,” senior brand manager Spencer Fivelson tells Marketing Daily. “They extend from the theaters to the retailers to consumers’ homes.”

Tying into a remake of an “iconic” movie like “Ghostbusters” (in theaters starting July 15) was a particularly compelling opportunity, Fivelson says. The movie franchise’s exceptionally high awareness and buzz factors made retailers highly responsive to in-store displays featuring the special promotional packages — and for an impulse product like popcorn, in-store promotion is crucial, he points out.

In addition, there’s a family engagement activity: a “photobomb” tool that lets users upload selfies through the site (or on mobile), superimpose the movie’s Slimer character or an Orville Redenbacher image, and share them on social. Photobombing qualifies the user for an additional sweeps entry.

The sweepstakes, running June 8 through Nov. 6, is getting what Fivelson dubs “surround-sound” marketing support. In addition to the site and the in-store program, it’s being promoted on both partners’ owned social media channels, with paid social media and digital advertising, and with a national FSI in newspaper circulars on June 19.