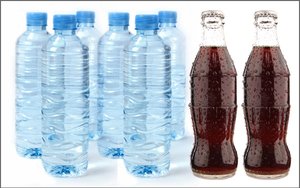 After declining for years, consumption of carbonated soda is expected to be surpassed by bottled water as soon as next year, according to a new report from Beverage Marketing Corp. (BMC).

Meanwhile, Philadelphia is today expected to finalize approval of a 1.5-cent-per-ounce tax on both regular and diet sodas — and other cities, including San Francisco, Oakland, Calif. and Boulder, Colo., are also expected to introduce soda tax proposals this year.

Previously, only Berkeley, Calif. had managed to pass a soda tax in the face of well-funded opposition by the soda industry. Berkeley’s tax applies only to sugary sodas and is significantly lower than Philly’s.

The soda industry, led by the American Beverage Association, spent nearly $3 million on an ad campaign to defeat Philly’s soda tax, according to Philadelphia Magazine.

Per capita, bottled water consumption jumped from 16.7 gallons per year to 36.7 gallons during the same 15-year period.

Bottled water is also contributing to declines in beverage categories including fruit juices and drinks, and whole and no-fat skim milk.

Energy drinks, RTD coffee, RTD tea and sports beverages continue to see significant growth, but their total volumes are still very small compared to soda or bottled water. The largest of those is RTD tea, with 1.7 billion gallons in 2015, per BMC’s data.

The bottled water brands owned by the Coca-Cola Company (Smartwater and Dasani) and PepsiCo (Aquafina) are, of course, among the major beneficiaries of the category’s surge in consumption. However, water margins are smaller than soda’s, and water brands don’t command the same kind of loyalty as soda brands, as S&P Global Market Intelligence analyst Joseph Agnese recently noted to USA Today.

BMC estimates that the switch from soda and other caloric beverages to bottled water resulted in Americans collectively cutting 61 trillion to 68 trillion calories over the 15 years. In theory, individuals cut 24,000 to 27,000 calories this way last year compared to calories consumed in 2000 — the equivalent of cutting 161 hot dogs, 126 chocolate donuts, or 87 cheeseburgers from one’s diet, says the research firm.

There’s no doubt that heavy consumption of sugary beverages has contributed to the obesity crisis, although the industry is quick to point out that it’s one of many factors, and also maintains that taxing soda merely results in discriminating against those who can least afford it.

According to an editorial in the same issue of JAMA, the obesity rate among children and teens (ages two through 19) was 17% between 2011 and 2014. The rate has decreased among those aged two to five since 2003-04, and stabilized among those six to 11 since 2007-08; but it’s steadily increased among adolescents since 1988.