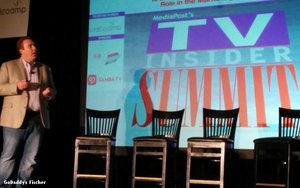 GoDaddy is well known for its extravagant use of TV media buys, having bought time in every Super Bowl every year of its existence, except last year. And tellingly, that may have something to do with Eric Fischer joining as director of global brand media a couple of years ago. While Fischer did not explicitly make a connection between GoDaddy bowing out of the last Super Bowl, he did make a case for utilizing TV with much more of a scientific precision than most marketers have utilized it to date.

Speaking during the opening keynote at MediaPost’s TV Insider Summit on Amelia Island, FL, Fischer called on the marketing community to throw away “preconceived notions” about using television -- especially old school metrics like GRPs and CPMs.

“I don’t care about the CPM, if I’m not reaching the right people,” he said, making a case for some much more refined metrics tied explicitly to the ROI a brand can generate by leveraging TV ad buys scientifically.

In the case of GoDaddy, the outcome it benchmarks its TV performance on is “acquisitions” or new consumers buying GoDaddy’s Web domain registration services.

He said GoDaddy goes a step further than a simple CPA -- or cost per acquisition-- model and actually calculates the “incremental” acquisitions generated by TV, or customers it would not have gotten if it had not used TV advertising. And even more precisely, the “marginal” incremental gains it has realized from new customers are from TV advertising.

While that seems like a much higher order than TV advertising is accustomed to, Fischer said it’s feasible, but through utilizing models estimating the “contribution” that media buys make to generate those returns.

“We need to think about contribution,” he said -- as opposed to things like attribution -- in other words, the direct, explicit impact of buying media on a company’s business goals.