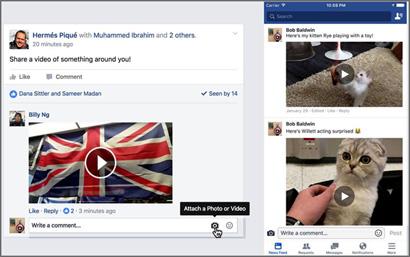 “Videos in Comments are now available worldwide,” Bob Baldwin, a product engineer at Facebook, notes in a new blog post. As such, users can now upload videos as replies to posts by people and pages, as well as within groups and events.

Although financially fit, Facebook needs people to share more personal posts, and it is betting on video and other fancy features to do so.

Facebook users are posting ample content, but mostly news stories and viral videos rather than personal fare. The latter is critical to the social giant’s health because it engenders far higher engagement levels and strengthens bonds among users.

That is why a recent report -- which found that original sharing of personal stories dropped 21% last year -- is so troubling for Facebook. Overall, recent findings from GlobalWebIndex found that users are sharing less content than ever.

In response, Facebook has been eager to reposition itself as a live-video platform. Indeed, it only began testing live video-streaming late last year, but is now planning to prominently place a live video tab right in its Messenger app.

Also this week, Facebook began encouraging users to share 360 photos with their social networks. “Simply take a panorama with your phone or capture a 360-degree photo using a 360 photo app or 360 camera, and then post it,” Andy Huang, product manager at Facebook, suggested in a blog post.

The company also recently rolled out a number of new video-based features, including Video for Groups and Events, with which users can more easily share live video with particular friends and family.