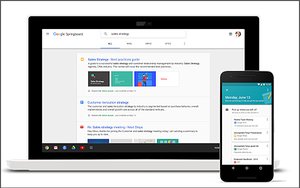 Perhaps lost in the hoopla of Microsoft committing to acquire LinkedIn, and Apple releasing Siri and Maps to third-party developers, Google said Monday it would introduce two new cloud services for customers of its Google Apps for business.

At an event in Tokyo, Google introduced two apps, a new application and the rebuild of another -- both with some machine learning techniques built in. The new product, called Springboard, replaces the discontinued Google Hardware for searching corporate online documents and puts Google in a better position to compete against the cloud services of Adobe, IBM, Microsoft, and others.

Springboard enables Google Apps for Works customers to search through the content of the documents they store in their Google Drive such as Gmail, Docs, Calendar, along with contacts entries. It also uses artificial intelligence (AI) to automatically find relevant information to what the individual's working on.

Prabhakar Raghavan, VP of engineering for Google Apps, in a blog post points to a McKinsey survey that suggests the average worker spends the equivalent of one full day per week searching for and gathering information.

One of the new features in the Web design tool uses machine learning to automatically suggest graphic design elements for your site, similar to Wix, the DIY Web site building service that launched an "artificial design intelligence" (ADI) service to automate the process of building Web sites.

In Google Sites, if the designer makes something dark on the Web site page, the technology automatically make the text brighter.

Raghavan explains that the classic version of Google Sites will remain functional for at least one year. And in the future Google will provide options for moving content from classic Google Sites to the new version.