#DadsAre Different: Have Brands Caught On? 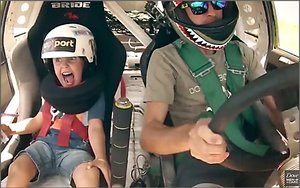 Rolling up on Father’s Day weekend, there’s no denying that marketers have done a much better job of mirroring how serious Millennial men are about the Dad thing.

Dove Men+Care, for example, has just launched a new 60-second ad called “My Dad, My Hero,” that shows amazing ways fathers make a difference. (It’s almost as good as the spot they did last year.) Courtyard Hotels drafts the kids of National Football League stars like Drew Brees and Vince Wilfork for a video about the importance of daddying. Even Zumba Fitness is building on fatherhood’s feel-good moments, with an ad celebrating dads who dance like no one’s watching. (It’s part of their #RealMenDance campaign.)

But some brands are trying to push past that initial impact to help men be better fathers. “It’s about more than a great spot that can air on the Super Bowl,” says Chris McKee, CEO of Flint & Steel, an ad agency that is working to turn PopCulture, a documentary about fatherhood, into a content platform sponsored by brands. “We think fathers want information and tools about how to be better dads. They want advice about finances. They want ideas about fitness, and ways to be more active with their kids.”

McKee says the idea grew out of pro bono work it did several years ago for the National Fatherhood Initiative, an organization that—among other things—hopes to raise awareness of the damage caused by absent fathers. (About a third of the kids in the U.S. don’t have a father actively involved in their lives.)

So the agency, which produced the award-winning The Black List, a documentary about leading African Americans, several years ago, produced PopCulture. (It airs on Father’s Day on the Pivot Network, with the broadcast sponsored by Glenfiddich.) And the agency is in talks with some CPG and automotive brands, which it hopes to involve in channels like events at military bases and YMCAs, as well as pop-up events and town halls.

“Brands should be paying more attention to dads,” he tells Marketing Daily. “In some ways, they are the new gatekeepers. We should be acknowledging them, counseling them, communicating with them. We hope PopCulture is going to be a way for brands to have a meaningful dialog.”

Some brands have already won a place in dads’ hearts. Amazon, Band-Aid and Craftsman are dads’ best perceived brands, according to YouGov BrandIndex, unchanged from last year. Netflix (No. 6), Heinz (No. 9) and Samsung (No. 10) all made it into the top 10 for the first time, while the Home Depot , Cheerios and M&Ms all slipped. (The index tracks men with kids 18 and younger.)

But perhaps the bigger insight than men interacting with brands differently once they are dads is that fathers are interacting with kids differently than they used to, according to a new report from the American Academy of Pediatrics. It's the organization’s first clinical report on fatherhood in over a decade, and cites numerous recent studies showing dads have considerable influence over kids’ health. (It’s encouraging its members to post social media about that impact using the #DadsAre hashtag.)

It points to speedy social changes, especially the 2008 recession, leading to more hands-on dads. In 2014, it says about 2 million single parents, or 17%, were men, and that dads now account for 3.4% of stay-at-home parents. And they’re more diverse: The report says some 10% of the 378,000 gay male couples are raising families, for example.

Men are more apt to play in ways that are a little rough, which helps kids explore and take safe risks. They’re also more likely to introduce new words, helping language development. And teens with involved dads are less prone to depression, and are less inclined to experiment with high-risk behavior.

advertising, dads, research
1 comment about "#DadsAre Different: Have Brands Caught On?".
Check to receive email when comments are posted.
Next story loading