Over-The-Top, But Under-The-Radar: Why You'll Be Watching Tubi TV

If you’ve attended any major TV industry event recently, chances are the keynote flashed some sort of Lumascapes-like chart illustrating an increasingly cluttered over-the-top TV environment littered with players running the spectrum from premium (Amazon, Netflix, Hulu, etc.) to free, ad-supported apps and streaming service from the major TV networks seeking to extend their audience reach and ad revenue base. More than likely, you did not see a logo for Tubi TV, a Silicon Valley startup whose motto is “Now playing, no paying.” But you will.

With licensing deals from major studios like Paramount, Tubi TV boasts a library of feature films and TV shows that is richer than its next most comparable rival, Sony’s ad-supported Crackle. It’s also the fastest-growing, with more than 20 million installs and ranking as the No. 1 app of its kind on Apple’s App Store.

While it still has a relatively low profile on Madison Avenue, Tubi TV is quickly gaining adoption from consumers -- especially young Millennials -- in search of premium content without a premium price tag.

Bayer, who is among the early adopters using Tubi TV, says he likes it because it is a simple way of solving a complicated problem of reaching erstwhile Millennials and other digitally empowered consumers who are either shaving or cutting traditional cords to TV ad environments.

“We’re very bullish on connected TV and over-the-top,” Bayer explains, adding that Tubi TV seems to have found the right mix of technology, experience and business models that can make the transition from linear TV work in a way that serves both consumers and brands.

“At the end of the day, we want to be where our consumers are, and they are increasingly on over-the-top video, 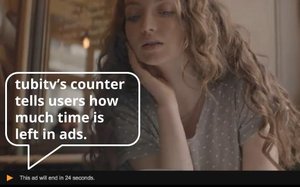 Currently, Nielsen estimates that about 5% of the consumption of TV programming is now occurring over-the-top via streaming or mobile apps, and it is growing fast. Some big agencies, including Cadreon sister unit Magna Global, are already predicting a not-so-distant future in which the majority of “TV” consumption will happen via streaming and apps.

Early adopter advertisers and agencies that have begun using it like it because it is a streaming platform that most replicates a TV-like experience. It’s 100% free to consumers, has top-quality programming, and runs commercial breaks that emulate TV’s lean-back experience.

But the platform also recognizes users’ sublime control over today’s video viewing experience, and when ads play, they include a counter cluing consumers in on how much time is remaining in the spot, telegraphing the implicit value exchange between consumers and the brands underwriting their premium content experience in an explicit, but tasteful way.

Even the TV industry sees the writing on the wall, and just this past week, a consortium of pay TV services made a proposal to the Federal Communications Commission that would require cable operators to enable their subscribers to have access to their services via apps, without having to lease or buy expensive TV set-top boxes.

While these trend lines may seem apparent today, they required some vision, a leap of faith, and the iron stomach of a Silicon Valley native entrepreneur to take a leap five years ago to launch a free ad-supported OTT venture that would go up against the major studios and TV networks.

“We made a bet that over-the-top was going to be a big deal, that it was going to be the future of TV and TV advertising,” recalls Farhad Massoudi, a Silicon Valley vet who is the founder and CEO of Tubi TV, which is beginning to attract attention from major agencies and brands.

It has been an improbable journey for many reasons. Massoudi, who was born in the U.S. of Iranian parents who were teaching here, ended up spending his formative years in Iran when his parents transferred back to their homeland, got caught up in the revolution, and were prohibited from leaving again.

When a 19-year-old Massoudi got the opportunity to vacation in the U.S., he chose to expatriate and stay, eventually attending and graduating from the University of California at Berkeley, before entering Silicon Valley’s workforce. He cut his teeth as an engineer at some startups, as well as Yahoo, and spent the next several years working for startups and even launching one of his own (Atracted.com in 2010) before launching AdRise, the precursor to Tubi TV.

Massoudi had the vision for a burgeoning OTT marketplace, but he still needed guts to make the move, coming after big Silicon Valley players such as Google and Apple tried and failed to enter the market.

“We were probably a little too early,” he admits, but “we made out bet and we stuck with it.”

Now that the marketplace -- both consumers and advertisers -- are recognizing it, Massoudi says his greatest challenge is scaling adoption simultaneously among consumers and advertisers. At 20 million-plus subscribers, he has enough to get the attention of both. With a library deep in major studio content, he has the assets to fulfill both their needs.

Among the content you can find on Tubi TV’s pulldowns is a “Not on Netflix” section that serves as a reminder that OTT is still an open playing field and just as Netflix disrupted traditional TV viewing patterns, so too could its viewership be disrupted. With a light load of TV-like commercial interruptions, Massoudi hopes to return TV back to its Golden Age of advertising -- one in which consumers have access to high-quality video programming, brought to them by their favorite brands.

According to Massoudi’s research, there currently are about 130-plus subscription video services available in the OTT marketplace, and there’s a new one launching every week. The average household now subscribes to about two of them. His goal is that Tubi TV will be one of them.

“It’s unlikely that most households will pay for more than one of them,” he says.