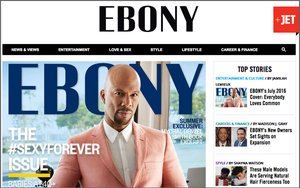 Ebony’s new owners are ready to set their plan in motion: turning a 71-year-old publication into a multimedia platform.

Last week, Johnson Publishing Company, which has published Ebony since 1945 and Jet since 1951, announced that African-American-owned private equity firm Clear View Group had acquired the titles.

According to a report by Ebony managing editor Madison J. Gray, published today, Michael Gibson, who serves as board chair of Ebony Media Operations, and Willard Jackson, Clear View’s vice-chairman, want the new company to transform into a “multimedia platform,” by expanding Ebony Media’s digital space and perhaps dip their toes into broadcast.

“We see bringing additional programs, activations, events, content…to further satisfy what we think is a need out there for African American content,” Jackson told Gray. “Whether it’s healthcare or education related, we want to offer different ways to provide content to the existing readership. We see really expanding the digital platform.”

“We’re the No. 1 African American brand in the world,” he said. “It’s the power of the brand that we think sets us apart from all those other sites and digital platforms.”

The new company will keep the magazine's Chicago headquarters and its New York editorial office and most of the current staff will stay onboard.

“We are not the operators of these different companies,” Gibson told Gray. “They’ll continue to be operated by the management teams that run the companies.”

As Publishers Daily previously reported, Linda Johnson Rice, chairman of Johnson Publishing and daughter of company founder John Johnson, will remain as chairman emeritus on the board of Ebony Media Operations.

Kyra Kyles will replace Kierna Mayo as editor-in-chief at Ebony. Cheryl McKissack, COO at Johnson Publishing, will take over as CEO of the new company.