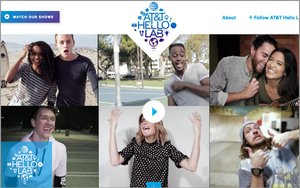 As AT&T moves deeper into producing online video shows for mobile viewers, it is looking at taking the clips from its popular Hello Lab series and turning them into 30-second and 60-second TV spots for the first time.

AT&T Hello Lab is a year-­long project featuring 10 digital creators at the forefront of mobile entertainment, including Grace Helbig, Shaun McBride, Brandon Armstrong, Damon and Jo, along with others. The company plans to announce the lineup at VidCon Thursday.

"We look for kids that already have friendships and we're just jumping into their world and relationships," said Billy Parks, SVP of Fullscreen’s Strategic Content Group.

This year Fullscreen launched a way for the audience to follow their group chat text on a mobile app called Public, he said.

AT&T has learned what works and what doesn't through trial and error. Nixon said the brand let go of the things that didn't work and held on to the ones that did.

In Season One AT&T learned from fans that the episodes were too long. Commercials, dubbed promercials, told through the eyes of the talent didn't feel authentic. By Season Three AT&T grounded the spots in the stages of life that the kids went through. One AT&T initiative focuses on bringing awareness to distractions while behind the wheel of a car. So the brand created a video simulating a car accident caused by the kids participating in car karaoke.

The segment gained more than 20 million views without any paid media because it was grounded in a cultural experience.