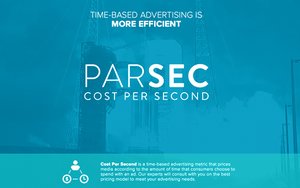 Parsec, a mobile ad network, announced that it has raised $1.5 million in seed funding. The company charges based on the amount of time consumers spend with ads on the mobile Web.

Parsec’s ads are “politely interruptive” as per a release; they don’t incentivize or force users to view in any way.

Jonah Goodhart, CEO of Moat, stated that Parsec’s time-based success metric could be a step toward finding a proper metric for brands to use with mobile devices, instead of something like click-through rate, which doesn’t align with a brand’s KPIs well.

The more time a user spends with an ad, the better their recall will be, regardless of how many pixels are in view.

“The amount of time that a person chooses to spend with an ad can be used to transact media more efficiently as well as measure creative and audience strategies more precisely than ever before,” stated Parsec CEO, Marc Guldimann.

Parsec has already worked with some big-name brands, including Colgate, Dell, BMW, GE and Discover Card.